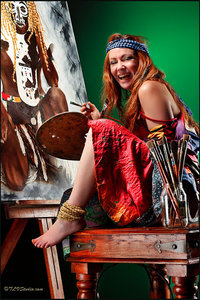 Shani was born in Harrismith, South Africa in 1975. At the age of 4 she moved to Durban where she was exposed to the Zulu nation & its culture. She became fascinated with the influence the Western world has had on this culture & because of this fascination, has often depicted the influence of the West on Africa in her oil paintings.

In 1990 Shani moved to Johannesburg. She matriculated there in 1992. She studied art at school but is mainly self taught.

Shani moved back to Durban after matric where she supported herself through her art while she went on to study photography at Technikon Natal.

By 1995 – the year her daughter was born – Shani was well acquainted with the usual art forms such as drawing, painting, print making, sculpture & mosaics. She became intrigued with living, moving art & decided to take this further. So she apprenticed in the art of tattooing & became a tattoo artist.
She went on to produce a collection of paintings inspired by different tattoo styles.

In 2001 Shani moved back to Johannesburg where she currently resides. She continues to explore the world of art, expanding her knowledge of mediums.

She is currently focusing on 2 main genres of work: contemporary & abstract.

Mostly, her contemporary works feature around her abhorrence for injustice & unfairness. They have a dream-like quality to them which differs from surrealism in that the subject does not supersede reality; yet they emit a sense of detachment from what is real. Observers get a feeling that they have taken a step out of present time (where the world can be cruel & unjust), into a world where matter seems ethereal & not always tangible. A world that is easier to bear.

Her abstract work is mostly sculptural & done in mixed media. It is in this area that she continues to explore & expand her diverse usage of media to portray abstract subjects, the likes of thought, emotion & philosophy.

These are works that don't really fit into a particular series.

Beyond the mist is freedom. It's a steep climb but with persistence, you'll make it. Don't give up.
Oil on Canvas

I think the title of this painting says it all.
Oil on Canvas
50cm x 50cm

Some of us swim round in circles in waters deliberately muddied to stop us from seeing the walls of suppression that trap us.
Mixed Media
180cm x 160cm

We're so busy,busy, busy keeping up with the Jonses & going with the flow (lets NOT do anything too weird or we may stand out) That there is no fear of noticing the world dripping with injustice around us.
Oil on Canvas
130cm x 90cm

we make harmony look so easy while we swim through oceans of injustice - just dodge the rocks & swim with the current. See? Easy!
Mixed media

The first step in fulfilling a purpose is one of those little moments that contribute to the livingness of life.
Mixed Media
3(70cm x 30cm)

“Time is on my Side”

These paintings depict the Influence the Western World has had over Africa.
Although Africa has been influenced by the West in many ways, Africans have still been able to hold on to their culture.