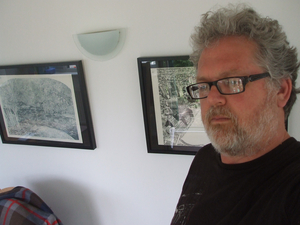 My practice revolves ‘artistically’ around the engagements between older, more traditional forms of making art and other, newer mediums - primarily, but not exclusively photography - and the ways in which we are affected by the mass media’s treatment of news events especially those involving trauma.

My current work explores the ‘site of trauma’. I’m interested in how some places are ‘defined’ by the events that happen within them, and whether the aura of trauma remains, either in the places, or in our representations of them. Although I have made work using a diversity of media, I have recently been exploring the use of carbon paper as a medium. This has allowed me to investigate a kind of ‘negative’ aesthetic, which seems more appropriate when working with images of a sublime, catastrophic or traumatic nature.

From the New Contemporaries 2010 catalogue:
“Fine, exquisite drawings, an overview of destruction and growth rendered at such a level of visual control [they] become questioned if not questionable in their endeavour. Aerial views, the descent to the bottom of the unfinished tower in Dubai worked backwards to engage with architectural language, the blueprint, the old method of rubbing Xerox paper to bring positive out of negative.”

Curator of the London Art Fair, Pryle Behrman picks his ‘ones to watch’ for 2012:
“Chris Shaw Hughes at Rise Art produces incredibly detailed monochrome drawings derived from photographs of landscapes that bear the scars of historic conflicts.”

thirtyfive-a, Brighton – We won’t get fooled again oh yes you will oh no we won’t oh what the hell, 2007

27 years working in the Advertising industry as Art Director and Creative Director, 1978 – 2005

Series of drawings and paintings created around the idea that some places are defined by the traumatic events that happen within them.