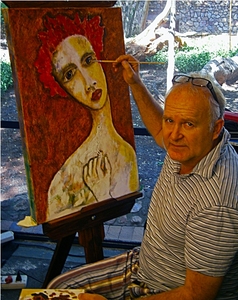 Laurens Barnard has a quiet and unassuming outward manner. He is an artist that belies in an active creative life that has of late come full circle.

Laurens Barnard - StellenboschBorn in 1957, Barnard has been aware of his artistic vocation since boyhood. At the Pretoria based Hendrik Verwoerd High School, his art master Mr Potgieter gave the initial impetus by awarding him 100% for a project in exchange for acquiring the selfsame work. This early accomplishment sparked off Barnard's frenetic career as local visual arts practitioner.

Shortly after matriculating, Barnard enrolled as a fine arts student at the Pretoria Technikon. During this period, the lure of the cinematic industry caused him to change midstream followed by a number of prolific years in film production. His personal highlights dating back to this sojourn through the milieu of cinema, is his former function as film-editor of the 1982 TV series entitled "Koöperasie Stories" under the direction of Koos Roets, working closely with his mentor Jans Rautenbach for four years and including, Shoprite adverts (interactively) promoted by characters in the current popular Afrikaans TV soapie - 7de Laan. In total Barnard was involved in eight hundred film productions spanning a fecund twenty five years in the industry.

Having traversed full circle by returning to his original love of painting, Laurens Barnard draws inspiration from a specific visual flow peculiar to the art of filmmaking. Closer observation of his approach to paint application on canvas, revealingly expresses a characteristic flow not necessarily encountered in the imagery of other painters, present or past.

His oeuvre is however in terms of application reminiscent of certain parallels relative to (20th century) French Fauvist and German Expressionist School. In contrast to the latter art movement Barnard's imagery encompasses a far greater state of 'Joeie de Vivre' as opposed to 'Angst' ridden visual distortion in his overall technical execution.

Despite an emphasis on humor, closer observation does reveal an underlying concern with the lesser apparent ambiguities of gender related issues, eg. half-moustached half bearded human males appearing with calculated regularity in his work. On a deeper psycho-social level these labile male depictions may be representative of the (currently debated) systematic disintegration of our long established feminine phobic patriarchal culture.

Conclusively speaking, his colorful imagery is there to be spontaneously relished in terms of a beckoning conceptual free flow. Such, is the core essence unique to the radiant allure inherent in the artistry of Laurens Barnard as revealed during a recent visit to his based studio.