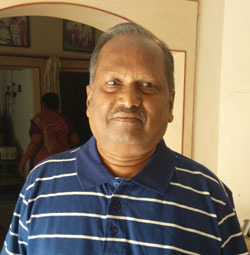 Sri V.V.SWAMY was born in a tiny village inSouth India. Shri Swamy had his fine arts training from his father, an eminent artist. Presently Sri Swamy lives and works in Hyderabad.

Shri Swamy has over 2,500 paintings in water, oil and acrylic colours in traditional and modern styles on paper and canvas to his credit. He has held 21 solo exhibitions on the themes of Village, Rocks, Nature & Environment, Electrical Power, Nehru and his Vision, Hyderabad 400 years, Bull fight , 50 Years of Indian Independence and Ganesha besides general themes in various parts of the country and also participated in a number of group shows. His works are in collections of various dignitaries in New Delhi, USA, USSR, West Germany, UK, and those of many other Indian and foreign personalities.

He has also received a number of awards in the field of Fine Arts and was honoured by the Andhra Association and Andhra Educational Society, New Delhi in 1982. He was also honoured by Smt. G.T. Tumen Bava, External Affairs Minister of Kirgia, USSR, and His Excellency Rebort Arbuthnott, Minister for Cultural Affairs, British High Commission, British Council Division. For his outstanding contribution in the field of Fine Arts, Shri Swamy was honoured with the\'Ugadi Puraskar 1998 by the Delhi Telugu Academy, which was presented to him by the Vice President of India. Sri Swamy's name was listed in the'Limca Book of Records 1993’ edition.

Author of several research papers, articles in literature and Fine Arts, Shri Swamy's books ’For Hyderabad’ and ‘My Inner Vision’ were acclaimed by one and all in the literary circles. Shri Swamy received ‘Honorary Doctorate’ in Literature for his English Poetry Books at the World Congress of Poets held at Sydney, Australia during 2001.
Sri Swamy can be reached on cell no:09440813852 /e-mail: swaamy.v@gmail.com

Modern gadgets like cell phones, i-pads,computers have occupied a dominant place in communication in rural as well as urban.
A village farmer is communicating with a cell phone.

THE FISH WAS DEALT WITH A SEPARATE STYLE.

MUSIC IS LOVED BY ALL. HERE THE VEENA PLAYER PLAYS MELODIOUS TUNE. THE PAINTING WAS DEALT WITH A DIFFERENT STYLE.