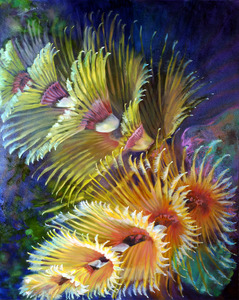 Robin was born in Washington D.C. to a family of artists; grandfather, father, and two brothers, (www.woodwardbrothers.com ). Her younger brother Tom is a set designer, artist, and a recipient of a Cleo Award. The eldest brother William Woodward is a renowned mural artist and professor of art at George Washington University.

While assisting her father Thomas Woodward with painting murals for "Colette's of the Watergate", Washington D.C., and the "Plate Grande" Restaurant in Annapolis, she became increasing aware of the impact of large scale paintings that influence her work today.

She taught art in both private and public schools in Maryland, New York and Haifa, Israel. Robin was the art director for 'Jaime' Textile Design Firm in Miami, Florida.

Robin retired from the Department of Defense in 2005 and currently paints full-time in Dania Beach, Florida.

“Breakfast in the Woods”