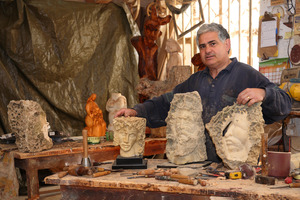 Mario Agius (b.1956) has manifested a fond inclination to sculpture and design from his early years. He began his artistic studies under the late Mons. Michelangelo Apap (1915-2006) and furthered his studies in wood sculpture under the famous Maltese artist the late Anton Agius (1933-2008). Juginder Lamba, a sculptor of international repute described Mario's works as if they “oozed with humanity and the human condition in a truly universal sense”.

The artist has a number of sculptures in private collections both locally and abroad including in London and Switzerland. His finest wood sculptures adorn churches all around the Maltese islands. In 1989 he followed a course of studies in sculpture in the UK at the White Knight Gallery under the tuition of international artist Ian Norbury.

Presently Agius teaches technology and design in wood at Ninu Cremona Lyceum Complex, Victoria Gozo. Mario has been actively taking part in various collective exhibitions including those organised by the Members of the British Woodcarvers Association. In July 2009, Mario exhibited his sculptures at the 'Marzi Art International Galerie' in Hamburg, Germany.

In 2010, Ballerina, a sculpture in olive wood, was awarded the silver medal in the 10th Salon International Exhibition organised by Groupemant Artistique Nantes Facade Atlantique (GANFA) in Nantes, France. In 2011, another two sculptures, Kommunità and Il-}ajja, were shortlisted by the Arti fit-Toroq Competition organised by the Ministry for Gozo. Subsequently Mario was commissioned to sculpt a life size monument in wood of “Kommunità”.

To date Mario Agius has held four personal exhibitions; another one jointly with Italian artist Gino Marsili at the St. James Cavalier Centre for Creativity, Valletta; and also participated in nineteen collective exhibitions. His work has also been featured in the Marziart Artists Calendar 2012, apart from local magazines Let's Gozo and Muzajk and on local TV stations.

Mario is married to Maria nee' Sultana and has three children: Victor, Graziella and Charlene. He has recently became grandfather to Nina.

The artist can be contacted on email: agiusmario@gmail.com or you can visit the website www.marioagius.com