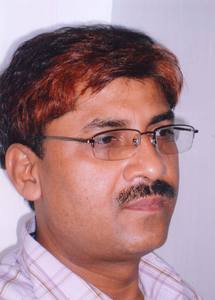 My childhood days were spent in rural Bengal amidst various hardships,it was a struggle to carry on my studies and so there was no question of any formal training in painting.But the resplendence of colours that life unfolds in the varied canvases of experience had entrenched a deep facination in my mind.I was and still am enrapture with the element and primordial forces that lie nascent and unchanging even as the world around us shifts from one hue to the other.For me therefore,the figure of woman in all her splendour and subduedness has remined the predominant influence in life as well as art-in the simple aspects of her daily life,in her raging anger and benevolence as witnessed through folk tales,mythology and other sources.The complex and gyrating lines in my paintings are a symbolic quest for this primeval force embedded in her.I have tried to capture her in various moods-of rapturous contentment or desolation,as a mother figure or as blushful maiden and so on,emphasizing in all these varying panegyrics the mystery of life that surreptitiously keeps writing its own story of creation.
===============

'VERSIFICATION OF LINE AND COLOUR'
Line is the forte of Nabakishore's paintings. They swirl, surge, intertwine, even retreat and move diagrammatically convering the pictorial space. Nabakishore lets his pen or brush move on the paper freely. The figures born out of those lines and of the exuberant colour splashes have a naive charm about them. They show faces of a next-door girl or of a folk deity and recall the images that we see in folk art of rural Bengal. In his paintings, symboils including the phallic ones create a primordial ambience. His browns and yellows, red and greens trapped in the darkness make up a rich fabric of forms.
Nabakishore is a self taught painter who teaches Bengali language and literature in a college. his knowledge of medieval Bengali poetry is simply reflected in the images that he paints. As a painter, he recreates the world of mythology and folklore in a visual language that seems unique.
Professor Sovon Som

.Another Face;-(Acrylic on canvas,24"x30",$800)
--------------
The Different moods of a woman are presented, the green suggesting procreative energy,the brown suggesting nurturing strength and dusty profile her moments of failure.

Uprising :(Acrylic on canvas,24"x30")
---------------
The colours symbolising stands of life are usedhere as though in an outburst,suggesting a reaching out towards the ultimate wisdom brfore merging with eternity.

The woman's face shows confidence in self and sense of identity et ironically a sense of past fears and indecision makes her shoulders sag. The ambiguity is touching in the portrayal of the woman.

Icon:(ink and water colour on paper,29"x21")
=======
The figure here may be god or goddess, but in all circumstances it is a symbol of nature's might, creativity, procreation and beauty.

Melancholy(acrylic on canvas,24”x18’)
---------------------
The faces depicted seem to suggest the inherent melancholy of the experience of a life that is agonizingly brief and our expectations are like hopes pinned on a stricken leaf.

The wise serpent : (water colour on paper 21 x 29")
------------------
The paradisal innocence in the intertwined male and female figures comes through as an amazing fact in the accompaniment of the beguiling serpent who in the Bible is the symbol of lust. The leaves, flowers, birds and all native awakens in this scene of
love.

The archetypal womanhood as conceiver and giver of life is presented in its completeness. The peace completeness and tranquility inherent in the creativity and nurturing quality of womanhood pervades the mood of the painting.

The Figure is picture of humanity and purity ,simplicity and virginity,the translucence and halo pronouncing the primal innocence.

Vortex of Apprehension:(acrylic on canvas,24"x18")
========
The whirlpool of complexities of life suck man into dread of what is and what is to be.

Genesis: (water colour on paper 21 x 29" )
-----------
Purity symbolical, echoing Biblical mytbs of procreation, the central apple suggests the flower suggests the conception and growth of life. Man and woman have their roles to play in this business of creation -- all of its powerfully suggested by a deft use of colours.

Tapestry of life :(ink and water colour on paper,38x28cm)
======
This painting presents life as an embroidered piece, with many colours, some chosen, some compulsive.

Winter (ink and water colour on paper,38x28cm)
--------------
The glow leaves tht fall off the branches in winter lose their link with the source of life as the face which seems incapable of communication in this painting.

Red pansy(water colour on paper,24"x16")
=====
The sinless quality, the innocence and simplicity of the child become symbolized in the red pansy which sits as a brooch on her dress.

Ceres:(acrylic on canvas,24"x18")
------------
Greek Goddess Ceres suggests symbolically industry and bounty that has to do with land and soil.