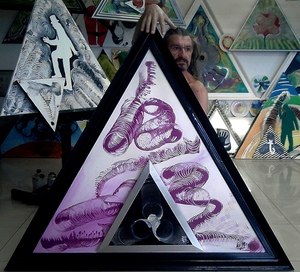 Sculptor and painter Péter Ábrahám was born in 1955, in Vecsés, a little town near Budapest. Already in his childhood he surprised people around him with amazing, thought-provoking drawings and toys, which indicated his later commitment to art. Considering the artistic principle "To be like nobody else!", he ignored the academic studies, he stopped his industrial art studies (at goldsmith major) and with the help of his industrial artist father he enlarged his knowledge on his own. In Argentina, at the age of 29 he studied new graphical and painting methods, then a couple of years later he went to Paris and he designed and painted stage sceneries in Michel Gyarmathy's Folies Bergère. Crossing the Channel, he lived the miserable life of young artists in the Soho, London. At that time the opposite sex, the ETERNAL WOMAN stood in the focus of his art. The essence of his artistic philosophy is the interaction between the so called grand art, the elite culture on the one hand and the average life and mass culture on the other, as well as the ruining of borders between them and building them up again. His works are experimental, so he shares the intentions of contemporary artists who want to modernize visual language. His works bear the stamp of irony, they take into consideration the conquering influence of promotion, banality, and the picture-like slogans of a big city's life. His artistic message is to draw attention to the absurdities of our consumer society. A lot of his works are inspired by music. For Ábrahám the method of forming and transforming is destruction, defunctioning. By defetishizing an object, he changes its original meaning. This method results in mixing and melting different styles. His sculptures in the open develop a harmonic relationship with the flora of nature. His statuettes are not at all theatrical, so they have got no strict limits. His painter's form of expression is most telling, in his strokes and colors emotions have a major role. His paintings - apart from personal features - can be recognized at first sight, they are characterized by a special space organization: they have triangle shaped frames. His paintings are mainly combined paintings, which bear pictorial signs of artistic originality, coiling, spiral motifs starting from circle forms, often mixed with three-dimension elements, mixed with anatomic prints. The artist says about his pictures: "My dimension-spirals recall cerebral convolutions, which ride the cart of spectrum on the route of fantasy." Studying all his paintings together, the frame, the triangle is a starting point, which stores a lot of energy and serves to extrapolate forms. The recurring circles are the spirals of organic being. They show determined ways, and they symbolize the order of changes, birth and death. They refer to the infinite, to eternity, connections, symbolize opposite forces as well, some of them are masculine (phallic symbol), and some of feminine (womb, caul) character. The painter, as a Big Master celebrates a ritual, he fights to raise our souls and morals. The ever recurring rings and the loops mean the different stages of our initiation. A lot of his works can be considered environmental. On his paintings you can see his fingerprint, his signature and his hair pressed into sealwax - the evidence of the artist's physical being. With this method of objectifying the artist symbolizes his immortality and that parts his body are becoming works of art, too.

OIL ON CANVAS 290X160 CM THE ONLY RECTANGULAR PAINTING 25 YEARS