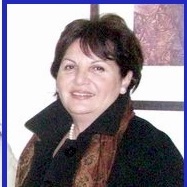 She was born in Antalya. She was educated in the painting department of
Teachers' School. When she was in school, she drew pictures on children
books. The artist who is a member of U.P.S.D., continues her work in
?stanbul.

Aysun Aksoy reflects the characteristics of individuals and their physical
surroundings on her canvas by using contemporary pop-art technique. She uses
women figures which resemble the goddesses of Mediterranean Civilizations.
She uses filmstrips as a signature when forming her work. These filmstrips
serve as a bridge within different time periods and different cultures.

The artist continues her work in KALEIDESKOP Workshop which she established
with her friends.

1996 - Participated in "For the other" project which was organised by

U.P.S.D. under the theme of Habitat II.

1997 - She was included in the biographical encyclopedia of

"Who is who in Turkey"

1997 - She established KALEODOSKOP Workshop with six of her friends.

exhibition which was organised by ??bank.