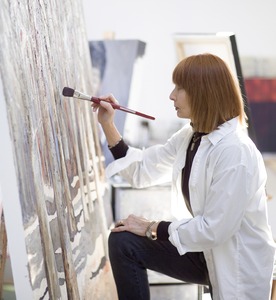 Andrea Harris is a Chicago artist who is recognized globally for her nature paintings, installations and public art. In addition to gallery exhibitions and representation, her artwork has appeared at public venues that include Chicago’s Mayor Daley Civic Center, World Environment Day at the United Nations, The John F. Kennedy Center for the Performing Arts and various college and university galleries. Her artwork was selected for permanent acquisition by the Illinois Institute of Art Chicago and is included by noted Chicago and international private collectors.

Harris’s paintings reflect moments in time that have left undeniable impressions. Her most recent body of work, “Reflections," interfaces her emotional response to observations that are fusions of atmospheric, wooded and undigenous forces of nature. Each painting is a common thread reminding the viewer that we are all connected.

Harris is one of 124 artists selected to create an artistic solution to global warming. Her “Eco- Heroes” five-foot diameter globe was on view at Chicago's Field Museum north entrance June through October 2007. “Eco-Heroes” has traveled to the US Botanic Garden in Washington, D.C., Exposition Park in Los Angeles, Discovery Park in Houston, Geneva, Switzerland and is scheduled for exhibition in spring 2011 in Amsterdam, The Netherlands. Her collaborative globe, created with Sandra Bacon & Ann Bingham-Freeman, appeared in Los Angeles, Copenhagen, Denmark and is scheduled in 2011 for exhibition in Vienna, Austria. Harris’s mini globe replica was one of twelve chosen for exhibition in the June 2007 Summit on Climate Change held at the United Nations and in 2008 was selected for exhibition at the John F. Kennedy Center for the Performing Arts in Washington, DC.

Harris was a founding board member of the Global Alliance of Artists, a non-profit organization that harnesses creativity as a catalyst for solving social and environmental challenges. Her introduction of the Art and Nature Program continues as a resource in the national "Leave No Child Inside" initiative to encourage youth in outdoor activity as a means to eliminate childhood obesity.

Nature Escape represents a place you may have imagined or a place you have been. It is an emotional, sometimes ethereal refuge and lives within our soul.