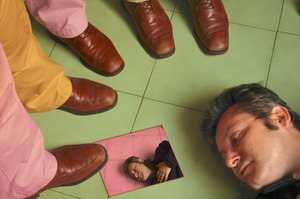 Short bio
Zefram, physicist, born in 1960, has been professor at the University of Naval Engineering in Naples, Italy. He’s presently a free-lance scientific consultant in the field of algorithms design, wireless communication and system optimisation. He’s involved in many European projects on telecommunication.
His photographic “second life” begun in 1978 when he felt a lightning handling for the first time a Miranda RE-II, his first reflex camera.
Zefram comes back to photography only in 2006, after a 12 years blackout. “A period I needed to focus on my own research” , Zefram says, “and to get rid of the merely aesthetic research (“photography to like”), so to move toward “photography to communicate”, independently of its aesthetic contents”.

Overview of Zefram’s photography
Zefram’s images are psychedelic spaces, revealing a suspended psychic state, attempting the stereotypes of the likelihood and disorienting who looks. The rational part of the mind gives way to the unconscious. But Zefram’s unconscious is not automatic (as is in a surrealistic way): his emotive states are real things of which the observer is aware; they can be seen, felt, touched. The reader faces an “unknown reality”, feeling that it is still unexplored, but already recognized.
To make real these dreamy and psychedelic spaces, Zefram creation process is as real as possible. Despite his images seem the offspring of “computer graphics”, the author employs real things in real locations. “The vision comes first”, Zefram says, “and then I fix it with a sketch with paper and crayons. Then the design follow, along with the needed logistic plan to make the shootings”. Indeed, Zefram’s photos are the outcome of a maniacally accurate planning and shooting phases and of a by far minor post-processing. “I need post-processing only to decrease the cost of some images that would otherwise result above the budget”, Zefram says.
In this perspective, the Zefram’s images do not depict reality in a more or less creative way, but, by creating ephemeral sculptures, modify it, shape it and thus build a fictional, dreamy, symbolic new reality which is the ciphered representation of concerns, fears, ambitions, obsessions or regrets.

“A matter of time and lullabies”

“Builiding the shape of the timeless questions”

“Dream of a midnight superstrike”

“Young lady and her deconstruction”

“Aphrodite pillows and ephemerides in the third system”

“Post disaster sowers in the meadowland of the mutant creatures”

“The secret society of the unsuccessful flights”

“The dreamboat and the bright ambassadors of morning.”