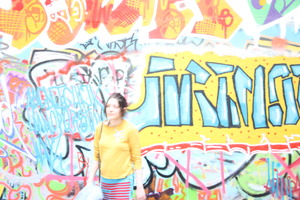 Valentina Paglia was born in Rome on 14th October 1985.

EDUCATION
1999-2002: Certificate of “Maestro d'arte” (Art Tutor) at School of Art G. Capogrossi (Rome)
1999-2004: M.A. in “Art of book press and restauration” at School of Art G. Capogrossi (Rome)
In December 2006 she moves to Valencia (Spain) and joins an art group of six people from different nationalities, and develops the “Galeria-Espacio”.
A cultural association of the gallery is created simultaneously.
Through this group she will select and mount exhibitions of numerous artists coming from the four corners of the world.
Despite the long experience gained with the team, in December 2010 she decides to leave the project in order to focus full time on her artistic growth and development; she will then develop a kind of visual art based on a balanced contrast of colours, irregular lines and shapes, representing both figurative and abstract images.

In 2012 she decides to move to London, with the aim of improving her experience on a human, cultural and artistic level.


ART FOR CHILDREN
2012: she donates the work “le false verità”, for the IV edition of "Il sorriso di Roberta per l'UNICEF: progetto "Ricostruire l'infanzia" Milazzo (Italy).
2011: she donates the work “lluvia de sol” for the Roberta Smedili Association, supporting UNICEF for the children of Darfur.
2011: she works as a trainer for an art therapy workshop; stage organized in Valencia for the P.G.E. Porta Institute (Parma, Italy), course of studies in Human Science.
2005: she volunteers as art therapist in the centre Casa Madre e Bambino (IPAB-IRAI).
2005: she works in the cooperative “L'arteaparte”.
2001-2004: she takes part to the following projects by the association “DilM”, for primary and elementary schools of the outskirts of Rome.
Inter-cultural project “Alla scoperta del mondo”;
Direction of plays for kids;
set up of travelling playgrounds;
workshop of “Ricicl-Art” and Art therapy (San Materno Infantile Genzano) in Rome.
2002: decoration works in the pediatric section of the San Camillo Hospital in Rome.


REVIEWS
Fabrizia Ranelletti for the event “Itinerarte”
“A painter and a sculptor. Numerous are the artistic fields where she expresses her fierce creative ability. Both in sculpture and painting, her interest develops in the research of the matter and the deep investigation of every single shape. In her painting rare magnified and rather “hieratic” representations take form. A particularly intense drive is to be found in the bimorphism that characterizes Valentina Paglia's entire artistic work.”

Anna Grossi for the event "Biennale di Senigallia"
Valentina Paglia, Fine Arts
A clear proneness for “technical” drawing, Valentina develops a language made of personal compositional models and a peculiar representation of reality. Her playing with colours, the constant recall to the use of embossing often catch the eye of the viewer. Hers is a path of constant growth leading to study and reflection on the ever-growing potentials of painting. A constant self-questioning on themes connected to “Classical” fine arts brings this painter to a constant renewal of her way to see and interpret art.