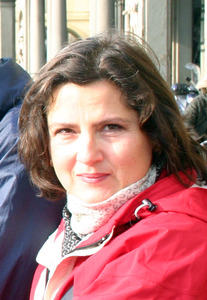 1979-1983
Along with the secondary school study, she undertook and pass examinations and then had been admitted to The Art School for Children of her native city and got successfully graduated after of four years of study in there at the age of 15 years old.

2007-2009
MA in Arts Curatorships, the University of Melbourne, the faculty of Art History, Australia.

Works could be viewed on her personal web-site: http/www.olgapasechnikova.com

These works initial a new turn in to my creative development and are mainly made during last two years.

“So desirable but still forbidden”

A figurative composition based on a still life. Oil on linen, 102 by 76 cm.

“Something mysterious about Venice”

A figurative composition based on a still life. Oil on canvas, 102 by 76 cm.

“The night of magic and reincarnations ”

A figurative composition based on a still life combined with a self-portrait. Oil on linen, 87 by 137 cm.

“A plenty of afternoon tea”