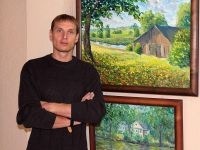 VALERY RYBAKOW a Member of the Professional Artist Union of Russia.

Valery Rybakow - a bright, original artist, whose work is based on a
combination of various styles and art: the artist's brushwork is close
to the art of realism, open colour palette of his works, the
transmission multicolour life and joy of life, is characteristic of
Impressionism; direct perception of the world - of naive art.

Currently in the works of Valery Rybakow dominated by still life and
landscape.

Nature proved to be remarkably in tune with the artist's
inner perception of the world, so it works regardless of the chosen
genre, organically, missed "by itself".

In the landscape artist, filled with the play of light, captured the unique beauty of native
wildlife: warm golden colours of autumn, the variety of flowers, the
endless expanses of the fields.

“Art can destroy and heal the human soul, defile and educate. And only a light of art
can save mankind: it heals the wounds, gives hope for the future, is the world of love and happiness”: says Valery Rybakow.

“I tried different techniques during my career, but I especially fell
in love with painting with oil and pallette-knife. Every artwork is the result of long painting process; every canvas is born during the creative search; every painting is full of my inner world. Each of my paintings brings different moods, colours and emotions. I love to express the beauty, harmony and spirit of this world in my paintings”: says Valery.

“My heart is completely open to art. Thus, I enjoy creating inspired
and beautiful paintings from the bottom of my soul. Each of my
artworks reflects my feelings, sensitivity, passion, and the music
from my soul. True art is alive and inspired by humanity. I believe
that art helps us to be free from aggression and depression.

Valery Rybakow, Russian, was born in Belarussia.
In 2002 he graduated from the Belarussian National Technical
University as an engineer-technologist.

Since 2001 he worked as an artist-designer in the City Television
"Intex", where he was developing the design of television programs.
Important role in formation Rybakow as an artist has played an
independent study of the creative heritage of painters from past Centuries.

Since 2006, Rybakow began to exhibit their work at International
Exhibitions of paintings in virtual mode, allowing collectors around
the world to get acquainted with the artist. Currently his works are in
private collections in Russia, Ukraine, United States, France,
Germany, Portugal, Italy, Japan, Singapore, Australia, Brunei
Darusalam and other countries.

In addition to paintings by Valery Rybakow engaged in art photography
and design.
In 2010 he participated in the international competition of Fine Arts
“Eastern Art Prizes”

Since 2010, a member of the Professional Artists Union of Russia.

In 2010, a presentation of his work in Baranovichi territorial centers
for social services.

In 2010, he took part in a charity auction of paintings held in Moscow
in late April - early May in support of victims of terrorist attacks
on March 29. Here's what he said about this colleague, the artist
Peter Tsvetkov from Moscow: “ Valery, congratulations on selling your
work at the auction! First - this is a real charity on your part, and
secondly an incentive for creativity, your work was needed, well,
still at a public auction together with famous artist like Vladimir Stozharovym, Aaron Buhom,
Zurab Tsereteli. Happy for you! "

In 2010 he published the photo book "Light painting palette knife"

In 2011 he took part in the competition of Fine Arts "Temples Berasteyshchyny" second degree diploma.

In 2011 he participated in an international competition of Fine Arts «" CityScapes / Cityscapes "», Light Space & Time Art

In 2011 he participated in a regional open-air artists' Krayavidy Berastseyshchyny ", dedicated to historical places Lyakhovichi area.

In 2012 he took part in the international competition "Artists Wanted"

Also, at the personal request of the mayor of the Polish city of
Olsztyn - Jaceka Protasa Valery Rybakow has donated one of his
original paintings.

I am glad to inform, that since recent time I sell the canvases and on Internet (http://www.rybakow.com/).

The 26 X 54" painting has been painted by an artist in Belarus named Valery Rybakow. His work is canvas, oil and palette knife.
If you want to see more of his amazing work visit www.rybakow.com
THANK YOU VALERY