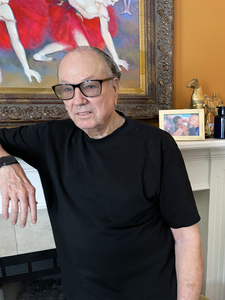 Charles Wallis is a graduate of the Baylor
University fine art program. After college he opened
a graphic design studio beginning his career as a
artist. His paintings reflect mastery of his craft and
versatility in a variety of styles and media. He
paints in a traditional realistic style, as well as
impressionistic, abstract.

ARTISTS STATEMENT:  My art is an expression
of my spirit to the spirit of others that connect with it.
I seek to create a memory, a wish, a fantasy
or moment of joy or peace in the soul of the viewer.
I pursue ideas, color combinations or images that
attract my attention and paint them as an impression;
or abstraction and some paintings are just for the
fun of presenting something in an unusual manner.

16 X 20, acrylic on canvas-A mother snow leopard watches out for her cubs. The snow leopard is one of the most beautiful animals
and is on the endangered list.

30 X 48, oil on canvas-A great blue heron in flight at sunrise over the north end of the lake.

16 X 20, oil on canvas-A mother polar bear prepares to enter the icy water to move to another ice flow.

16 X 20, oil on canas-A mother cheetah and her cub sun on the savannah during a spring afternoon.

“First Steps Of The Fawn”

30 X 40, acrylic on canvas-A great blue heron searches for a meal in the shallow back water.

This collection of paintings are classic impressionist and expressionist landscapes.

“The Valley Of Vineyards”

The collection of vineyards flows down and through the valley in this impressionist painting.

This is a fairly realistic impressionist painting of typical sunflowers in the summer.

“A View In Sedona”

There are many wonderful vistas in Sedona, AZ and this impressionist piece captures one of those

“Come Away With Me”

This expressionist and impressionist peace invites you to walk through the country lane.