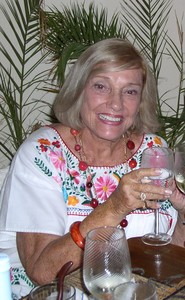 SOUNDS... LIGHTS... COLORS...
Three stages of perception which have dominated and influenced my artistic mind since childhood.
I was born in France and was lucky enough to be surrounded by famous and talented people. My grandfather, ERNEST ARCHDEACON, was a prominent French lawyer of Irish descent who pioneered aviation in France. My brilliant mother, ANNE-MARIEL, was a prolific writer with 120 books published. My uncle, MAURICE DEKOBRA, also a writer, was internationally acclaimed for his work and has been translated into fifty three languages.
Well... that was quite stimulating for ME, and I found myself involved in the artistic field with a singing career under the name of CARLINE. With my first album, I won a "Grand Prix Du Disc de L'academie Charles Cros"--the equivalent to a Grammy award in the United States--which gave me the opportunity to travel under different skies--Lebanon, South Africa, Spain, Portugal--fascinating places which inspired me so much that I bought my first camera to capture "THE MOMENT." I kept going later on after moving to California with a great husband at my side.
In March 2004, I had the opportunity to visit the Huntington Beach Library and was impressed by the display of wonderful artists. With enthusiasm, I joined their Art League and, little by little, familiarized myself with other similar programs in Orange County, thus beginning my photography career. 2011 ushers in my seventh year as a photographer with eighty-five prizes to my name, received for my digital, mixed media and regular photographs. Among these is a special award presented to me by the International Society of Photographers in 2004 for my stunning picture of the Eiffel Tower at night.
My work is regularly displayed at the Showcase Gallery in Southcoast Village, of which I have been a member since the beginning of my career. In January and February 2012, I will have the opportunity to be the gallery's featured artist for the third time since becoming a member. I have also had displays at other locations in the Orange County area such as the Artist Eye Gallery in Laguna Beach, the John Wayne Airport and the Orange County Fair.
Having a perceptive imagination which allows me to quicly frame and immortalize a scene, an attitude or a personality, I have created my own unique style--an artistic love affair--which I now wish to share with you. Through the eye of my camera, I strive to capture yesterday, today and tomorrow. I truly believe that art can promote peace and understanding in the world's societies.
--Evelyn Morris
View my work at www.artinphotography.biz

My credit of winning with different contests is up to 98 Prizes.
Here you will find a sample of my work, a mixture of regular photographs, mixed media and digital works. I hope you enjoy them!