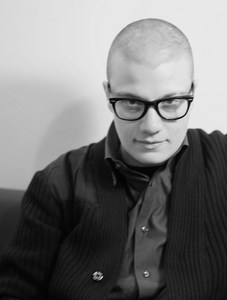 The things you see

There is a frame, a bit of cinema that is in the mental archive of the latest generations: the redcoated baby coming out from the grey ( in colors and meanings ) of “ Schindler’s List” a symbol of the stonen childhood.
Symbol, when recognizable, is the icon of absolute values, more than words. When symbol, language and image meet, the tale becomes the best way to tell stories that become universal from personal.
A little girl turning her back on us, with the background of sea,sky and land all together, all these things generate an image that has a deep impact and meanings: Alessandra Baldoni’s shots are magnets that attract and repel in the same time.
Here is Little Red Riding Hood and the wood, here is Alice with her dreams hold in the tea-pot of the Mad-Hatter and SnowWhite with her apple that is love and death together.
Fables heroines or lonely lonely women, these subject are composed by the artist in shuts of stunning beauty.
The actors are conscious characters, no fakes here but composure, balancing from solemn corporeal stillness to sincere emotional vibration.
Their way to be so enigmatic, in a certain way perverse, becomes sweetness of a restless mind, sensible and hidden in those tracks that like pages of a diary, escort the intimate journey of the photographers’ eye.
The sets of this journey are the background paintings of a nature wild and familiar: woods, the sea, the grass, dead leaves in autumn, romantic skies, her stylistic key is the chromatic saturation ( red- green, light- shadow, life- death, reality- dream ).
Subject are so deeply decontextcualized that appear in ther full- alarming realism: looks, when they don’t turn their back attract the attention of the whole frame. The strenght of those eyes, even if not thought as portraits, leads back to the brutal iperrealism of Diane Arbus’ wide- angle lens, that( just like italian neorealism ) caught the plain truth in people’s faces.
But Baldoni has got her feet well planted in her time and you can see it by far looking at her sense of solitude and restlessness which is so “ XXI century ” .
Her “ mise- en- scene ” more than 800’s tableaux vivant looks like fragments of a storyboard where nothing is accidental; and even when the composition is extremely gauged it never comes to be mannerist.
These screen-plays are the static- action of a personal experience that Alessandra Baldoni wants to pass on and explain, to warrant a universality of sense.
We see actors of unfinished screen-plays looking for a place for them, just like pirandellian subjects in a theathre of absurd.

“What really matters it’s not a privileged moment, but to find a reality of his own; after this all the moments are equivalent”

But there is more than this. Here is nature, in strong colors and clear cuts, in which the human shape moves, alone, always pervaded with a sense of unrestlessness and illness.
Still girls vibrate over landscapes of a sublime echo ( but the calm is only apparent ) with menacing and dramatic skies; or look shyless the observer.
Baldoni’s work is the result of a search drove by a deep need to freeze the frame- choosen among millions of others- and to make it last forever.
This is an emergency more than a need for her: photography is, she says : “ the way to immortalize the world, to tell the world, to tell yourself to the world ”.
The tale is the subject of these photos: chinese- boxes which tells and are told,always going to show infinite and different “ point of view “.

“The wood coming after me that drinks my shadow”

“So it must be my reading the bottoms”

“I see you mine in the eyes cracks of dreams”

“I dreamed the map, the bone cross”

“shut you up, baby, come back round and be stone from egg”

“Pug me this fear with bread”

“It's benind the eyes that you emerge”

“Body the last place to hide in”

A time just for us

A love that is imperfect, is a perfect love in wrong time and circumstances.it’s a homeless love, a love with no place, a love no longer visible.
Without a place in the world, it’s a love with the hidden face of him and her ( untitled 1,untitled 2 ) both lying and waiting for the disclosure of ther mystery.
They are hidden lovers, the bodies lying down on the ground, waiting for a belonging. Not- consecrated couple breathing under a red scarf that hardly shows their shapes, like Magritte’s “lovers”, they hide something, the same thing they tell.
In a low voice, like words of love and night promises must be told, she holds a rose in her hand, the same rose, maybe, he’s got in his collar. It’s a pact, a trich or a secret. Love returns the objects into symbols and love builds meanings.
Love devises ways, stratagems, love runs alone paths not in the map, love keeps himself awake at night, love goes through enchanted woods using magical instruments to upside down the order of things.
“Love breeds” is the desire of creation in every level, carnal, spiritual, artistic. The words on the body of the metaphorical- son are fragments of a correspondence. It’s the dream of extention inside the other and beyond, the flooding of a beloved land.
“ The beginning of many alphabets” represents the first copy-book, the first shy tryings of writing, the signs that will tell every “ from now on”.
The page is open on every “a”, the same “a” that brands the fire seal of the letter of “you in my pockets”, a paper amulet that you bring like a soldier lost in a war of handicaps and adverse fate.
“The paths of stone petals” tells the story of a walk into words and stones not to get lost.. they give a visual track to the hound- heart.
“take to your heels 3 times” ( from the dorothy of the “Wizard of oz”, is the dreamt way to reach the beloved-one every time, wherever she is, as fast as desire itself.
And if by daylight there are magical shoes,at night you need a pillow ( “The entrance of sleep”)with words similar to an erotic poem ( by Patrizia Valduga ) that leads you to the edge of dreams, to the passion that emerge-again with the dark, the starving passion that comes up body from ink. The veiled lovers have to unveil their face and look totally at themselves.
They must look ,and let everybody look at them if they want a place to baptize with ther name, if they want a “title” to name them. Love upsides down the order of things, subverts and undermines, love moves the tide latitudes.only by running this risk, and only then, they’ll have a time just for themselves.

“A time just for us”

“The beginning of many alphabets”

“The path of stone petals”

“The entrance of sleep”

“You in my pockets”

“Take to your heels three times”

Once upon a face

Once upon a time there was a face in the nights of my dreams, an unexpected
face, just a glimpsed face.
There was a face able to surprise me, to let me in the air.
A face without understanding, face that brings other things.
There are moments when the weave of reality loosens itself and between the
mesh a doubt creeps. Something amazing. Like in a fairytale the physical laws
don’t works, we move in a world made by symbols and signs and enigmas, a
world made by secret words to repeat faithfully.
It’s thought out of focus, that doesn’t expect to understand everything,
to define everything.
The pictures of “once upon a face” are just like small cracks on the thick wall of
the visual common sense. They are spells raising mysterious animals,
miraculous objects.
They are small stones floating in the mind. Small paper obsessions. They are
sharp in their black&white that emphasize their alienating side, that bring to
their essential side and make them dramatic.
Drama means laceration, fissure.
In this kind of crack these imagines get in. These visions change the world.
Because there is still something to say. Something that take away all the old
words to bring a new one.
There’s a language made by names that look like butterflies on the lips.
Butterflies able to rise and fly upon an oppressed and grievous land.

“My words are toys”

“This morning in the mirror”

“You’re still laid on my pillow”

“The enamel of dreams”

“There was a king that loved so much”

“Devil hides himself in the corners of the granaries”