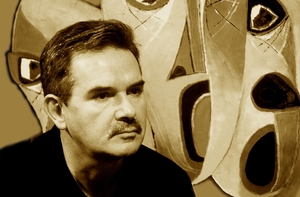 Gabriel Gross and the Perpetual Search

Gabriel Gross (from Quito, Ecuador, born 1952) is an extremely lucid and sensitive man, which is the vital epicenter of his art. It is away from art that he withdraws and to which he always returns without delay. This has been the emblem of his existential being. As a child he was already drawing in secret (from whom was he hiding? Himself? Who knows!). As soon as he graduated with a bachelor’s degree, he moved to Washinton D.C. as a self proclaimed pilgrim to study art at the Corconan College of Art and Design. His rich and varied intellect is due to his inexhaustible longing for integral training and knowledge, always in the field of the visual arts. His experience as producer, director, light and sound designer for multiple theatre productions, along with his multi-faceted personality, has led him to serve as an actor in short films. In every place where he has studied at academies or centers of study, he visits the museums and galleries of the area, absorbing everything that they are able to offer. While studying or reading about art, he is always training himself in drawing or in the use of color. As a compulsive tracker of the mysteries of art, his spirit has reached moments of profound contemplation about his experiences and about everything that has tugged at his attention.

Lightness and levity are the signs of Gross’s art. His visuals do no invoke disturbances, but tranquility. Not anxiety, but strength. No darkness, but illumination. Not distraction, but seduction. It doesn’t matter if it penetrates one’s inner perplexities or confronts themes of the environment, the artist, unperturbed, gives us a sunny joyful world impregnated with tenderness (the dreams of his childhood and adolescence are a constant theme in his work). It is in this space that he houses his characters. “Dream with an art of equality and serenity, dispose of themes of disquiet or deprivation,” said Matisse. These high spaces reach Gross, undoubtedly provided by his intense spirituality. Gabriel is not only an aesthetic of mystery, but also a man searching for the essence of life, the meaning of his existence, its inescapable dialect of joy and sadness, drive and hesitation, isolation and hope. Vocation and creation lived to the fullest with a big heart, the heartbeat of a poet, and the steps of man.

Drawing and a Commitment to Learning

Drawing reveals, as no other form of visual expression, the commitment to always learning. It is the yardstick for measuring how much dignity is in the artist and what this represents. Drawing is the visible line of the poet (and how much poetry is in Gross’s work!) for verification if something new and profound must be told and is truly worthy of shedding light upon. Gross always found constant renovations and in it the development of truth, converting the drawing to his breathing exterior, under beautiful and harmonious forms and shape; breath that, in sum, emerges from its more hidden meanders and becomes a third life in his work. Gross’s work is haunted by a dim picture, almost un-aggravated, clean and precise, shaken by a slight rumor (who, the child who lives in the artist, crosses it on tip-toe?).

Color
The cardinal point of art is to indicate some exultation in being, confirmation of life, and revelation of the human destiny. The rest are trivial exercises. This exultation can be given in two ways: one through the envelope of life, accepting the sensual vibration of the colors, the pace of the forms which are all one in nature constantly moving and transfiguring. The other is resolved in the interior labyrinth, accepting instinctive impulses, the findings of the conscience (meditation and introspective attention), and perhaps above all, abiding by the impersonal claims of the unconscious (the last ones are the prototypes, images that come without being desired, but demand to be expressed). In the pictorial work of Gabriel Gross, in a manner unlike many other artists, these two slopes converge: magical glazes vibrate against the light of the colors, composing and recomposing evanescent forms and figures but materialized through the alchemy of his art, art that is at once the expression of his intimate voice- essential, secret, one that is planted in your mind. Gross uses strong colors, often are dark, or intense white and black that attracts them both and his canvases and murals enliven, strengthen, and encourage. Here there is a Christ, beautiful and vital, to rejuvenate faith in the life of others. Or a figure that reluctantly gives us the feeling that he is enjoying the playfulness of life. Or, finally, a row of ghosts that returns dreamed up images, or sights, of our distant childhood.

A certain Feng in a Sukizu story in his Essays of Zen Buddism was about to die when he asked his disciples if they had seen teachers who died standing, to which they responded yes. But when Feng confounded them by asking if they had ever seen someone die standing on his head, they replied, bewildered, “no, never until now.” With this, Feng, in one rapid movement, stood on his head and died. In this tale, concludes the philosopher, lies the realm of the soul.

I know nothing of this or any other wisdom. But the above-mentioned story leads me to the images of the soul of Gabriel Gross- toward a deeper and true observation of his magnificent creations, such as innocence, purity, hope, and that light that perhaps is closest to us but we are reluctant to discover it or we are not capable of reaching it. This, in summary, is the visual approach of this Ecuadorian artist who is always on the rise.