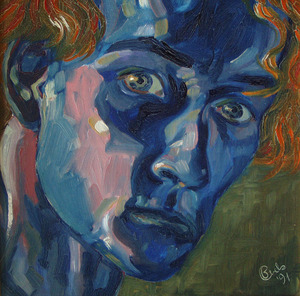 Buda Balázs is one of the rare painters who use the traditional technique of the oil-based painting.
Moreover, the near total of his pictural work is articulated around the realistic vision of our world.
He was born (1963) in Hungary, in a country which always signed its attachment with the ground, with nature, as in folk works than in the "great art".
By formation he is a professor of visual arts and biologie. He taught in Budapest as in France before devoting himself completely to painting and ceramics.
His professional recognition by the Commission of the Professionality in Paris enables him to use the title: "artist painter". He developed a technique, which is his own one: the Painting of Tapestry.
His ceramics is borrow of a style feeric, historical, sometimes bucolic but never naive. He concentrates all his reflexions on the Man and the human condition in his ceramics statuettes

“Pose of a young painter”

“The year of Tiger”

“Young woman with her dog”

“Two daughters of a mother”

“The lobby in october”

“Dovecot under the snow”