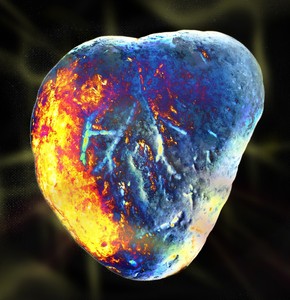 I was born in 1961 in the current Czech Republic.
I studied economy and until my 33 years of age I was employed as a financial clerk.
Painting I started as late as at the age of thirty six, during my maternity, when I together with my three year old daughter Sabina created colour aquarelle abstracts. And at that time I experienced for the first time that strange,mysterious force, which literally led my hand. Since then the painting became an unseparable part of my life.
It indeed changed my view on life, in effort to understand the world and the human being as a whole. It slightly opened the gates of undiscovered mystery. I work with my subconscius, intuition, with inner sight and positive energy- with the help of imagination by music, meditation or contemplation. Large part of my work consists of the paintings with the animal theme, namely birds.
Inspiration comes to me from the world of dreams, fantasy, fairy tales, and even from the spiritual world. Spiritual consciousness awoke in my heart hidden, deep faith, and in spite of the fact that I was raised as a materialist and an atheist, it brought me to the biblical way of life.

The word “holotropic“ literally means “aiming towards entireness“ (from Greek “holos“- entire and “trepein“- move towards something). This word is a familiar term in the world of psychology, therapy, and it has originated in American psychotherapy. Holotropic therapy gives preference to the activation of unconsciousness, which leads to extraordinary states of consciousness. It recognises the contribution of these states to the development of the personality, not only in the therapy. In the area of art the detection of the unconsciousness is particularly important in the whole creative process. So we designate the “holotropic art“ such art, which is oriented towards the “being“ in its entirety, and it is characteristic for extraordinary spritual states, such as meditative, mystic, psychedelic experience etc.. Among others this state of consciousness is possible to observe during spontaneous psychic changes. Science is pointing out ways beyond the border of the mind- so called transpersonal psychic dimensions. Transpersonal experiences were defined as experience expansions or as an extention beyond ordinary borders of the physical “I“, and also beyond the borders of time and space. For example, scientists, such as K. Wilber (1980), S. Grof (1988) and others gave notice to that. In holotropic art we can also apply non-pharmacological methods (accelerated breathing, rolfing, actuating of imagination by music, body-work and so on).
Prof. Dr. Miroslav Klivar Csc

After meeting with prof. Klivar in 2002 I started to read the books of an American scientist Stanislav Grof, they ment a big contribution to me.

all paintings are oil on canvas

“Between Heaven and Earth”

“Beyond the mind's realm l.- Spirit”

From the world of fairy-tales

“Kings of the Bird Empire”

“Before the cock crows”

“From the Sea Empire”

“To eat and to be eaten up”