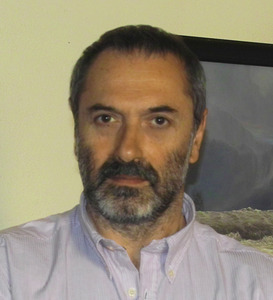 Was born in 1955 and despite he was attending a technical school, at the age of 14, his interest for painting grew encouraged by his father, also a painter. In the art of painting, exception made for a brief period of time spent in the Art School of Brera between ’74 and ’75, he can be considered a self-taught artist.
He starts almost immediately to expose his works in local collective exhibitions in Piacenza and suburbs; his paintings deals mainly with fantastic views with expressionistic and romantic accents, all his subjects are strongly influenced by his life spent on the mountains.
The first personal exhibition is in 1973 in Saint Vincent, and is soon followed by others. Immediately after that he suspends his activity for a long period of time.
Shortly after his thirtieth’s birthday he starts back, in complete solitude, an intense work made of studying and dealing with various different subjects. Now, differently from his earlier season, his interests and models do not refer any more to the art of ‘900, but look to the ancient artists, especially the north European once, that were more close to his propensity for landscape painting an, in general, for the aesthetic of sublime.
Starting from ’92 he starts back to exhibit his works punctually. His art meets gradually the taste of the public and also sometimes that of critics, owning various recognitions in important events. In the same period of time his painting strikes the attention of various art galleries and this allows him to abandon any other activity and to concentrate only on his art. From 1992 till now (2006)he has prepared about 30 personal exhibitions.