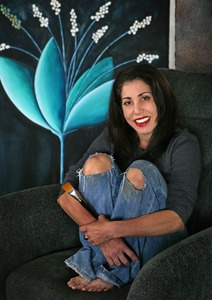 Rachel Tribble’s award-winning, dream-like paintings have been recognized for their serene and meditative quality. Commissioned by corporations and private collectors, her technique is a combination of influences from early in her career, and a life long interest in the environment and light. Light began specifically describing itself in her work over several years. First, in her career painting gemstones and jewelry and then her artistic turn into creating multi-media installations for her own performance art, rock nightclubs and rave productions.

Originally from Manhattan, Rachel worked as jewelry designer in New York. In the early 1990’s she moved to Minneapolis, where she became known for her dark and sometimes controversial performance art and installations. Inspired by the depth of the Minnesota winters her work took on a surrealistic edge, with a social and environmental message. In the mid 1990’s Rachel took a hiatus from her life as a professional artist and lived and worked among the Native American people. In 2003, she returned to her traditional training as a painter, inspired by the journey she found herself on and the mystical worlds of the Aninshinabe and Lakota people.

In 2008 her work won the IFEA Gold Pinnacle Award for Best Festival Poster Internationally, for the Walt Disney Company: the Epcot International Flower and Garden Festival poster. Since then, Rachel’s work has been showcased at Epcot’s Flower and Garden Festivals, including the 2011 Festival Poster and merchandise art, and at the Epcot Food and Wine Festival.

In 2009 she was awarded the Atlanta Design Center’s Visual Display Award.

Her work has been featured in art books such as the International Contemporary Masters Vol. V & VI and national magazines, including Florida Design, Better Homes and Gardens, Vive, Garden Design, Coastal Living, and Aspen Journal; as well as gifted to nominees of the Academy Awards, the Emmy Awards, and the MTV Movie Awards.

She continues to dedicate her work to peacefulness in the world and the celebration of the Earth, Sky, and the multi-dimensional universes.

She lives in Stuart, Florida near the Atlantic Ocean.