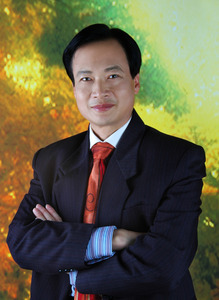 The East Meets the West--A Journey in Art

Artist Arthur B. Liu was born in Guangzhou (Canton), China . Under the influence of his father--a professor, calligrapher and sculptor, Arthur B. Liu was exposed to art and literature, and displayed a passion for painting at an early age. While in his teens, he studied under Master Yongquan Yang, a renowned artist in China. He continued his education in the prestigious Fine Art Department of the Institute of Guangzhou. It was there that Arthur B. Liu developed and refined his artistic techniques. Upon graduation in 1980, he was offered a teaching position at the Guangzhou Normal School of Education, China, which he gladly accepted while enrolled in the Guangzhou College of Fine Arts to further his studies.
Pursuing his dream of expanding his horizons in art, Arthur B. Liu traveled to the United States and settled in New York City. He journeyed through every museum and gallery he could find, studying the works of great masters and benefiting from the distinctive approaches of every school of art. Meanwhile, Arthur B. Liu studied in Queens College and the Art Students’ League, before moving on to his graduate study at City College, City University of New York.
Arthur B. Liu graduated in 1990 with a master’s degree in fine art at City College, City University of New York. He began working at Sing Tao Newspaper (New York) Ltd., serving as a designer then the Artistic Director.
In 1997, Arthur B. Liu founded the Queens Art Education Center in New York. Through his ingenuity, he invented a unique “flowing-colors oil painting” technique, unknown then by his peers and artists before him. For this, he received a patent from the United State Patent and Trademark Office (Patent # US7,572,126 B2), the only one for which a U.S. patent of oil painting technique has been granted to a Chinese artist.
Every year Arthur B. Liu displays his oil paintings in diverse art shows across the United States. His paintings have won wide acclaims by critics and the public alike. Many of his painting are hot collection items by a growing number of fans and companies. Among the many prizes he has garnered are the following:
Nov. 2001 Award of Merit at the National Art League USA Annual Show;
May 2002 Golden Award at the World Peace Award Art Competition;
Feb. 2006 Citation from the New York City Council Office;
Feb. 2006 Citation from the New York State Assembly Office;
Nov. 2006 Award of Merit at the National Art League USA Annual Show;
Feb. 2007 Citation by the New York State Assembly Office;
Dec. 2007 Citation from the New York City Council Office;
Mar. 2008 Award of Innovation Achievement in Painting from Center for International Art & Culture;
May. 2008 Top Ten Artists Award at 11th Beijing International Art Exposition 2008.
Nov. 2008 2009 N Y Regional Leadership Award from International Leadership Foundation.
Jan. 2009 Certificate of Appreciation from U.S. Department of Commerce.
May.2010 Golden Award at Shanghai International Art Expo.
Des. 2010 Golden Award at Guangzhou International Art Expo.
Arthur B. Liu is the President of the Queens Art Education Center Art Salon, and a Director of World Art Center and the Chinese Culture & Art Association. He is also a member of the National Art League of USA. And The water color Society of American.
Arthur B. Liu established himself as a well-known artist in New York City. As a teacher-cum-innovator in the world of Art, he is fusing artistic expressions of the East and the West.
Arthur B. Liu’s address: 48-23 203rd Street, Bayside, NY 11364. Tes: 718-229-6098/917-513-9789.Web: www.flowingcolors.com. Email: liubihua81@hotmail.com.

Arthur B. Liu hasn't uploaded any images yet. Please check back soon!