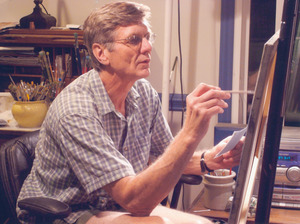 After receiving his Bachelor of Fine Arts from NYU, Terry and his wife Chris served two years in the US Peace Corps teaching 7th and 8th graders at Abeyie School in Debre Sina in the highlands of Ethiopia. For their summer project, he and his wife gave TB and smallpox vaccinations to Ethiopians in remote areas of Jimma Province.

Returning to the US, Terry taught art for 12 years at a high school in New Ipswich, NH, where his students studied drawing, painting, pastels, and wheel-thrown pottery. Terry joined the NH League of Craftsmen and sold silkscreen prints through the League’s network of galleries.

After moving to Wilmington with his family, Terry taught art for the next 25 years at North Brunswick High School. His students regularly won top awards at the annual High School Student Art Competition at the Franklin Square Gallery in Southport.

Since retiring in 2006, Terry has been painting full time. He is a member of the Wilmington Art Association and the Waterway Art Association of Calabash and competes in numerous regional juried art shows each year.

Inspired by such artists as Vermeer, Winslow Homer, and Andrew Wyeth, Terry is fascinated by how great artists suggest light, shadow, color, and detail in paintings.

A life-long photographer, one of Terry’s photos is usually the starting point for a painting. He improves the subject by carefully adding and subtracting details and by altering the perspective (if necessary) to form a pleasing composition. When painting, he welcomes challenges such as interpreting in oils the interplay of light and movement in water. Believing colors should be true, his paints Maine to look like Maine, not the tropics. In addition to landscapes and seascapes, Terry loves to show people interacting with others or with their environment. A realist and a perfectionist, his paintings undergo many revisions and take months to complete. Terry signs a painting only when he believes nothing else can be improved.

Viewers have told Terry that his pictures evoke feelings of tranquility, joy, and empathy for his human subjects.

Last month, a one-man-show called “Waterways, Towns, and People” featured 35 of Terry’s painting at the Community Council for the Art’s Hampton Gallery in Kinston, NC, where two of his paintings sold.

More information about Terry’s paintings and career may be found at his website (www.rosenfelderart.com).

“Winter Morning on the Sound”

“Castles in the Sand”

Oil on Canvas: Terry paints people encountered on his travels.

“A Taste of Summer”