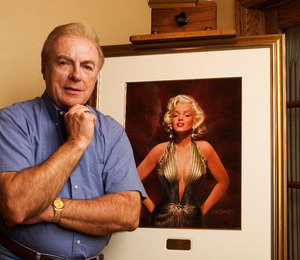 Dick Bobnick is a nationally published illustrator and portrait artist having produced award winning illustrations for the print industry in book covers, national ads for corporations, publishers, advertising agencies and the collectibles industry for over forty five years. His specialties have included celebrity portraiture, action-adventure, sports, glamour, pinups, historical and religious subject matters and he has won numerous national and international art awards for his illustrations and portraits. His complete bio and listing of awards can be found on his official website: www.dickbobnick.com and his official print site: www.dick-bobnick.pixels.com .

This art gallery of original Gouache paintings depict some of the most iconic film stars in the history of Hollywood films from the 1930's through the 1960's, often referred to as Hollywood's Golden Era.

Hollywood's most famous blonde bombshell, Marilyn Monroe, portrayed here in her famous 1953 Photoplay Magazine "Star Of Tomorrow" gold lame gown. Beginning as a figure model for the famous photographer, Andre DesDiennes, she soon became a well known cover model for mens' magazines. From there
it was a hop skip and jump to minor film roles like LOVE HAPPY with the Marx Brothers and super stardom in the early '50's.

This portrait was commissioned by the world famous Franklin Mint for inside front and back covers for a special collectors' edition of Joyce Carole Oates' novel.
BLONDE, based on Monroe's sad life story. The painting has been the recipient of several major art awards.

Portrait study of the legendary dramatic actor and icon, Humphrey Bogart, depicted as he appeared in his classic film, CASABLAMCA, as Rick Blaine, owner of the American Cafe.

Portrait study of the legendary grand dame of all movie sex symbols, Mae West. She is portrayed here as her title character in her own play, DIAMOND LIL. Miss West was the highest paid movie star during a six year period in the 1030's when she was well into her 40's. She continued in films well into the 1940's taking a five year respite before touring once again with DIAMOND LIL in the U.S. and the United Kingdom. She developed a popular Las Vegas show in the 1950's, made T.V. appearances throughout the '50's. After a semi retirement she made her last film appearances in MYRA BRECKENBIDGE in 1969 and SEXTETTE in 1979.

Portrait montage of the celebrated vocalist, musical comedy and dramatic actress, Doris Day. Miss Day, acclaimed the most popular movie personality from 1955 to 1966, is portrayed here in her starring role as 1930's Broadway star Ruth Etting in the 1955 award winning MGM film LOVE ME OR LEAVE ME.

Portrait study of the award winning film actor and director, Clint Eastwood, portrayed here in his starring role in his film THE OUTLAW JOSEY WALES.

Portrait study of the iconic Western and action hero actor, John Wayne, portrayed here as he appeared in his film HONDO.

Glamor portait of the late popular movie actress and singer, Carole Landis. Miss Landis was known for her work with the USO shows in World War II and the Hollywood Canteen in the early 1040's. Her career was cut short in 1948 at age 29 with her suicide brought on over a broken love affair with actor Rex Harrison.

Portrait montage of the classic comedy team of all time, the Marx Brothers: Groucho, Chico and Harpo. Also depicted is an early Marilyn Monroe as she appeard with Groucho in LOVE HAPPY and Margaret Dumont, the perpetual Marx Brother's foil in many of their films.

This portrait study of the famousof all movie monsters portrayed by the brilliant English actor, Boris Karloff, in the 1931 Universal classic film, FRANKENSTEIN.

Portrait study of the legendary sex symbol, movie and TV actress, Raquel Welch. First featured as a TV cancer and then her first memorable role as the fur skinned beauty in ONE MILLION B.C., Miss Welch went onto make many films and TV appearances in addition with Bob Hope on his famous Armed Forces Christmas shows.

Glamor portrait of the popular 1940's actress, singer and U.S.O. entertainer, Carole Landis. Miss Landis was a favorite of the G.I.s and the male audiences in general for her spectacular figure and beauty. Her career was cut short at the age of 29 when she committed suicide in July of 1948 as the result of a broken love affair with actor Rex Harrison. Her death has widely been questioned as a possible murder due to destroyed evidence and payoffs to police by Harrison.

Portrait of actor Jay Silverheels as he appeared in his most famous role, Tonto, the loyal companion of the Lone Ranger. The two starred in
the famous television series and three feature films.

“SINGIN' IN THE RAIN”

The famed trio of stars of the super Hollywood musical of all time, SINGIN' IN THE RAIN, starring Gene Kelly, Debbie Reynolds and Donald O'Connor.

This portfolio displays original paintings of famous persons who have made names for themselves in the history of our country and the world. They include images of presidents, military heroes, religious icons and adventurers.

This painting depicts one of the country's most important military leaders, General Douglas MacArthur, as a West Point cadet and as a major force in World War II in the South Pacific and meeting with President Harry Truman and his landing on Leyte.

“THE SPIRIT OF ST. LOUIS”

This painting commemorates the 1927 solo flight of American airman and adventurer, Charles A. Lindbergh, from New York to Le Bourget Field in Fran e in 33 1/2 hours. His specially built aircraft was the SPIRIT OF ST. LOUIS.

Award winning portrait of the world famous Roman Catholic nun, humanitarian and Nobel prize recipient, Mother Teresa of Calcutta. She was the founder of the Catholic order of nuns, the Sisters of Mercy, and her work with the poor and the afflicted, for many years, has been honored by nations and governments

This painting, D DAY 6TH OF JUNE, was specially commissioned by the United States Historical Society in 1994 to commemorate the 50th anniversary of the historical Normandy Invasion in 1944. It portrays the leaders and commanders of the invasion: General Dwight D. Eisenhower, General Omar Bradley, General Jimmy Doolittle, Field Marshall Bernard Montgomery and Admiral Roland Kirk, the military units involved in the invasion and the map of the five beaches of entry.

Portrait of the famed evangelist and patriot, Reverend Billy Graham, who was a consultant and adviser to eleven U. S. presidents.

The 45th president of the United States, Donald J. Trump has accomplished more in four years with legislative victories and executive orders than any other president in recent decades.

Three American presidents who changed American History for the better in the areas of race, taxation, religious liberty, military strength, international relations, the economy and morality.

This boudoir portrait was a commission by a private client for personal exhibition.

This is one of seven paintings commissioned by the R.J. Reynolds Tobacco Company to promote a new line of flavored Camel cigarettes. The illustrations appeared in many national magazines including PEOPLE and SPORTS ILLUSTRATED.

Pinup illustration of a pretty girl commissioned by a private client.

Pinup portrait of a young free spirit beauty in sweater and denim shorts.

Glamor portrait of a beautiful young girl in a sexy gown.

Pinup illustration commissioned as one of a series of pinup paintings to promote Camel flavored cigarettes by rhe R.J. Reynolds Tobacco Company.

One of a series of pinup illustrations commissioned by the R.J. Reynolds Tobacco Company to promote Camel flavored cigarettes.

This portfolio features some of the top stars of Football, baseball, golf and figure skating.

Former Minnesota Vikings quarterback, Bret Favre in the 2009 and 2010 seasons.

Portrait montage of major league pitcherGregMaddux with the Chicago Cubs, known as "The Professor" and four times consecutive winner of the Cy Young Award.

Portrait montage of a young teen figure skater with dreams of the Olympics and Ice Capes stardom.

Tom Brady, the most successful quarterback in NFL history. A star with the New England Patriots from 2000 to 2019, a Super Bowl champion six times, Most valuable Super Bowl player four times and numerous other personal records holder.

Portrait montage of Bud Grant, coach of the Minnesota Vikings for eighteen years. Holder of
many professional titles and awards.