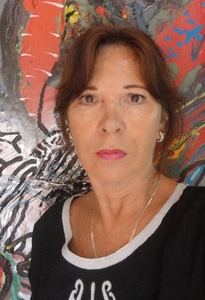 Born, raised and educated in a small town in northern Germany I was fortunate to grow up in an artistic family, with an Architect for a father and Photographer for a mother. During my childhood our family spent most holidays traveling through Europe and beyond, visiting museums, galleries, ancient cities, caves and even cemeteries were occasional on the agenda. Despite the wish of my parents to study art or architecture I opted to study the field of law while producing art in my spare time. Back then I met my husband with whom I ventured on an amazing journey around the world until that day when we decided to call Australia home.
After settling in Australia I felt the need to combine vast experiences with my inner urge for expression and decided to paint, starting out with a series of “happy watercolor paintings”, designed for our new home, family and friends. From then on painting became my passion, resulting in the production of mostly loud work, with a strong relationship between land, life and beyond. In 1997 beautiful but time consuming motherhood curtailed further artistic ambitions; however, when time allowed I continued to produce colorful creations on canvas, paper or board.
Since 2010 my love to play with imaginations, fantasies, colors, texture and perception of the natural world – real or unreal – intensified, taking my work to another, more experimental level.
Today my main objective is reflection but in more than one way: I like to integrate the past, the here and now with the unknown as it relates to future, space or time, questioning what might be ‘out there’ or not. By using several techniques and not being constrained to a certain style but remaining faithful to a particular subject/topic, my paintings almost become alive, allowing visual interchange of connectivity to the viewer, by their own ability to reflect the soul.

However, if you would like to contact me, please send an email to: artsablo@gmail.com and I will get back to you a.s.a.p.

My current series “The Net” is about connectedness and based on an encounter of a huge spider web in our backyard. I took a photo and studied it later in detail. Pondering and inspired by this natural creation I concluded, that apart from new technologies, physics or theories there is and always has been a natural presence of connection. As soon as we are born, we are falling into a kind of safety net and over time, all the open ends will connect to different environments or scenarios. This series is my attempt to reflect on “The Net” by using its structure as a polarizing background, capturing an imagined snapshot and connect a given circumstance with a network.

As a photographer and digital artist I like to experiment with various resources. In my current work and series “A Picture Show” I am working with a large number of snapshots, mostly taken around home – on the Gold Coast Australia. By following my imaginations I mix and match shots from my photo file, creating colorful scenarios of a different, alternative world. This has resulted in a picture show of collective moments of the past, reassembled as collages, challenging the viewer to imagine, enjoy or wonder.

“A Peacock on a Palm Tree ”