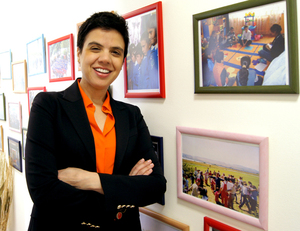 Ebru Uygun
Ebru Uygun was born in 1971, ?stanbul. She finished Austrian High School and then graduated from the department of Marketing-Economy, Webster University in Switzerland. She was a volunteer for two years at Christian Children Foundation in Switzerland. During this period she decided to establish a foundation in Turkey. When she returned Turkey, she worked for accounting manager assistant in ?pa? which is textile company. Ebru Uygun established TOÇEV in 1994. She has been maneging the TOÇEV foundation since 1994. TOÇEV, contribute to raise a cultivated, well-educated, generation for the future of Turkey, to give material and moral support to children who want to be educated during all their school life, but who are deprived of education due to the economic insufficiency of their family and who are obliged to work to earn their living, to support them to be harmonic and creative people in our social life. She is member of the board Elpa Textile Company, vice-charman of Artists Supporters Foundation, vice-charman of FMF Foundation, chairman of 100 year ISIL Education Foundation. She has written four book which are named “Room with the number 102 (2005)”, “The Hearts that I Touch (2006)”, “Growing Together (2009)”, River of Hearts (2013). “The Hearts that I Touch” was taken by the Ministry of National Education and it was given out in the primary schools.

1996 TOÇEV is considered worthy of the “successful foundation” prize by the Prime Ministry General Directorate of Foundations for its contributions to the Foundations Week and also for its active works.

1998 TOÇEV Chairman of the Board Ebru Yarcan (Uygun) is chosen the most successful junior of the year in the contest 'The Year’s Most Successful Juniors' organized by 'TYYB Junior' in the 'Contribution to Humanity and the Voluntary Organizations' section.

1999 Is considered worthy of TMBB special prize for its success in the Tunceli.

Ebru Uygun stands out with her modern vision of this traditional turkish art by developing new techniques. Instead of transferring her art on paper, Uygun has reflected it on wood, tile and cloth, and therefore has integrated The Art of Ebru in our everyday life. “The harmonious dance of the colors reflects my wonderland!” says Uygun, “It’s a world where evil has no place. It’s pure and clear. When I’m marbling, I discover new worlds… It’s a joy.”