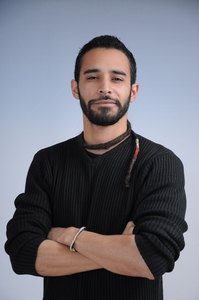 Graduate in the Fine Art School of Casablanca. 2011
Office director of the Moroccan Visual Artists Without Frontiers Movement. 2013- 2014
Member of Articultures Association 2014.
Member of Margin to Mainstream Foundation. India 2014
Laureate of the Global Art Center. Belgium 2017

I am fascinated by painting a fantasy word with surreal figures to express the ambiguity of the feelings that we can have while being confronting to the daily struggles of this world.
I am sometimes surreal, sometimes expressive, I find myself unconsciously in these two pictorial aspects, in search of strong sensations I gives birth to a mythical and intriguing style that illustrates a dreamlike universe, populated by characters and scenes that are halfway between this real world And another imaginary world, where there is no boundaries, no rules, and no physical law restrictions. To allow more space and more freedom, to expand the whole word that seems too tight to my perceptions. To create images that transmit deep messages, images with poetic and philosophic concepts of the human’s existence.

My work consist on painting the complicated life of the human being, i try to illustrate some deep feelings and weird behavior of the people of nowadays, how people react and interact with the nature and with the world around them, a world full of contradictions, dualities and ambiguities must be seen represented by an expressive and surrealistic approach...

oil and graphite on canvas

“the bridge of change”