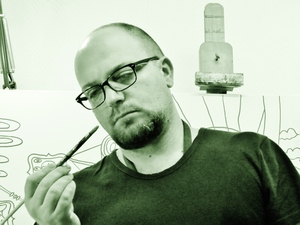 The work of Dastid Miluka, interplay between his childhood dreams and a grown-up discovery, this collection explores the visions that started at a tender age and still inspires him today. In his creations, Dastid plays with characters that evolve through a hide and seek game of reality and fantasies. A parade of contrasting worlds, lush colors, light and motion, these paintings explore a theater of people and imaginative places that coexist in harmony. This is the world reflected through Dastid’s own dream spectrum, and fantasies.
Dastid Miluka was born on September 15, 1974 in Tirana, Albania. He started his art studies at the prestigious Artistic Lyceum and went on to major in Scenography and Custom Design at the Fine Arts Academy of Tirana.
In 2003, he moved to Belgium to further pursue his artistic ideals. He has presented his personal exhibitions at “La Maison des Culture” within The Art Festival BRXL BRAVO in Molenbeek-Saint-Jean. He has exhibited his works at the “Musée Communal d’Evere” and at the “Aux Vieux Comptoir” in Evere, Brussels.
In 2008, he presented his works at his personal exhibition at the Albanian Embassy in Hague, Netherlands.
In 2008, Dastid was the Stage and Lightening Designer and Stage Director for the spectacle Tirana-Brussels, the “Balkan Trafik” project, which took place at the esteemed Palais Des Beaux Arts in Brussels.
He has also worked for “Davidsfonds” Association setting the stage for their youth show at Espace Toots in Evere in Brussels.
In 2010, he participated at the 2nd edition of “Godon Trophy” in Touquet Paris Plage, France.
Recently he has exhibited his work in his personal show at Gallery “De Lange Litanie” in Roeselare, Belgium.
In 2011 Dastid participated in a collective show at “The Gallery Garden” in Brussels. This year he participated at the third edition of AAF Brussels held at Tour & Taxis and he also presented his work at the exhibition “Portraits” at Chapelle de l'Institut de la Sainte Famille in Brussels.
He had also participated at exhibition “ZythoPlasto” at Abbey of Dieleghem: Rue Tiebackxstraat 14 ,1090 Brussels, Belgium.
In 2012 Dastid presented his works at “St Valentine” expo at Gallery Garden-Begramoff in Brussels.
From 16-18 March 2012, Dastid presented his latest collection in the cadre of AAAF at Radison Blue Park Hotel in Antwerp, Belgium.