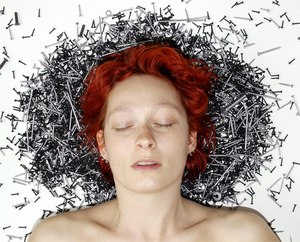 Astrid Verhoef (Amsterdam, 1973) studied Photography at the Arts Academy in Utrecht (graduated 1998, Hoogeschool voor de Kunsten Utrecht) and has been working as a professional Photographer and artist ever since.

Verhoef was part of The Noorderlicht Photomanifestation in 1999 and published the book “Inheems” (“autochthonal”) on Dutch landscapes combined with poetry in 2002. She’s had several solo-exhibitions in Rotterdam, The Hague, Amersfoort and Amsterdam. Her project “Unadapted” consisted of photography inspired by the novel “Portrait of the Unadapted” by Bernard Wesseling and was exihibitioned in Amsterdam in 2011 & 2012. Astrid’s work was part of the IJFFF Photo- & Filmfestival 2012 in Amsterdam, Photoville 2012 New York, “The Wonder of Woman” exhibition at Gallery Fontana Fortuna in Amsterdam & United Photo Industries “(Super)Heroes” exhibition at the Manhattan Bridge Anchorage. She has been chosen by GUP Magazine as one of the 100 “New emerging Dutch Photo Talents 2013” and is represented in the Art Takes Miami Catalogue 2013. in 2013 Astrid Verhoef was part of the Dumbo Arts Festival (New York), and Photoville 2013 (New York), both as a participating artist aswell as producer of the Dutch Group-exhibition “Keep on Dreaming”.

Astrid Verhoef’s inspiration derives from the urge to manipulate the visible world. She pulls reality out of context to visiualize it in an alternate appearance. By using the absurd and the surreal she offers resistance to the over regulated society. Verhoef raises the indentity of the individual therein. The relationship of our cultivated life with nature & our position between the natural and the manufactured are important themes troughout her work. Verhoef translates these themes into tragic yet humorous scenes, placing individuals and objects in places where they don’t seem to belong. Challenging the boundaries between the real and the surreal, she invites the viewer to renew interpretations and their visual vocabulary. Astrid Verhoef is currently working on a project titled “Urbanite”, in which she gives her vision on the urbanite in absence of the city.