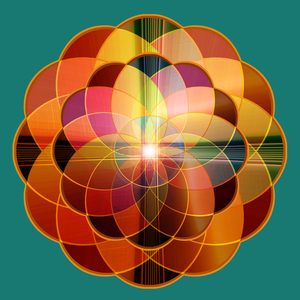 Visual Artist, born in 1976 in Belgium, Charline Lancel lives and works in Brussels. Ever since she was a child, she showed an eye for beauty of colors and the harmony of shapes. Her photographic work consists of photo-manipulation, called digital Op Art. Minimalist in expression, It is characterized by harmonious compositions of abstract, geometric (linear or spheric) lines and motifs. In 2007 Charline created a collection of matricial Abstract Compositions, filled with light and colors.

The innate beauty of forms and colors

I want to reveal the innate beauty of forms and colors, which do not presuppose culture or intellection on the part of the beholder, and which act quite simply upon the inner self, on man as a being of feelings. Ever since the world came into being, since man has been thinking or creating, everything was already in existence. Great constants remain unchanged. One should conceive of a way of reducing existence to relatively few things : oxygen, water, sunshine, geometry. One could say that the circle stands in for paradise, and that squares are the skies. One could say that the circle is the sun, the moon, a planet, a galaxy, an ovule, an atom or an electron. From the infinitely small to the infinitely large, one could say that the round shape stands in for life, fecundity, love. One could say that vertical lines connect earth to cosmos, the spirit, frees and elevates itself. Horizontally, man and woman are one. At the intersection of vertical and horizontal, there is a point which would represent the union of matter and spirit, where the child of love could be born. This encounter of a vertical and a horizontal line in the middle of a circle contained within a square, is a way to conceive of conception as the union of matter and of mind, for a collective and universal happiness.