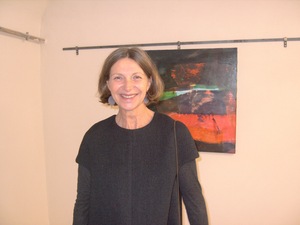 Augusta Mariateresa Bariona was born in Milan. Her family passed on to her their love for art: her mother is a sculptress; her uncle was a major collector of contemporary art. After her studies in philosophy, communication and marketing (IED) and some works in the advertising industry, an adventurous phase of her life began between Atlantic crossings and stays in the Tuscan countryside, where painting begins to take more and more space.
In 1991 a car accident marks an important turning point for her: after tacking psychoanalysis, she begins a systematic journey of spiritual quest consisting of several stages among which the most important are anthroposophy and meditation. Meditation as transformation: seeing things as they are. From that moment on her life takes the final bend of the path of soul searching, mixing various professional experiences including youth theatre.
The painting of that period consists of watercolour, her first works of tissue paper, food colours, and large size temperas. Just from the second half of the 90s she began her first tissue paper collages. Among several other activities she performed in that period, there is also the playful making of small booklets she achieved with her friend Alberto Casiraghi, published by Pulcinoelefante.
Continuing with collages, she perfected the use of overlapping paper. In 2002, in order to learn other techniques she attends the Academy of St. Luke in Milan with an emphasis on anthroposophy. She begins a series of oil paintings inspired by Death, Astrology, Alchemy and planets, all themes related to her deep passion for astrology, which will also become a real job for a certain period.
In 2007 she creates a video installation entitled “La Divina Madre” (“The Divine Mother”), a symbolic representation of the alchemical transformation, where she burns most of her remaining works. The following year she started again with the White. Since 2010, she resumed the colour and the use of tissue paper, exploring new paths, always closely linked to her personal research.
Incidentally, she is the co-author of “Lavoroscopo”, a Galactic Guide to Business Astrology, published by Guerini, Milan, in 2008. “Ipotesi Arruffate”, a book of poems published in 2010 with “”Il mio libro”by Feltrinelli.
In 2012 she finished with Francesco Silvano Contiero the monumental mural work “Pioggia di Stelle”, located in Rosasco: www.pioggiadistelle.it.
2013 a solo exhibithion in Casale Monferrato (Alessandria) Italy “ Shadows of thought” curated by M° Giovanna Barbero.
She lives in Rosasco, in the countryside of Pavia, where she has her studio, while devoting herself to her other passions, namely: photography, roses, cats and poetry.
www.augustabariona.it

paper on canvas with resin