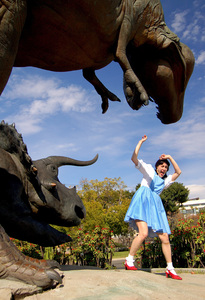 Janet E Souza took an interest in photography at age 13 and learned Black & White in High School. At Montserrat College of Art her passion for Digital Photography, Abstract Painting & Fashion began. She studied the works of Cindy Sherman, Francesca Woodman, Helmut Newton, Nan Golden, Jeff Koons, Barbara Kruger, Pablo Picasso & Jackson Pollock. In 2004 she moved from Massachusetts driving cross country to Los Angeles. She attended the Burning Man Festival in 2005 and it inspired her to create several paintings, as well as photographing the experience. Afterwords she embarked her own personal & artistic ventures. Inspired by one of her childhood favorite movies "The Wizard Of Oz" she created a satire series "Lost In LA". After many trails and tribulations she returned to her hometown of Gloucester, Massachusetts in 2008. Janet joined North Shore Art Association in 2011, and Rocky Neck Art Colony & SeARTS in 2012. In September of 2012 Janet had a Sole Artist Show at Rock Neck Gallery, as part of a summer long series of Artists.