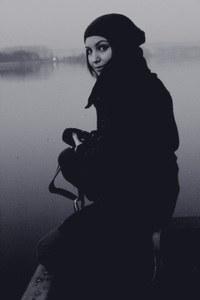 Alessandra Pagliuca was born in 1988 in Chivasso, in the province of Turin (Italy), where She still lives and works. She graduated from a high school specializing in painting and then decided to devote herself full time artistic experimentation. Her "debut" took place in 2012, when she released her first personal collection of works marked by hyper-realistic research and the study of faces and human expression. She has exhibited in different locations and galleries in Italy and abroad.
Alessandra's core business is based on commissioned works by private customers, companies, and public corporations.

"I've always been almost obsessed with human faces and glances .
My research initially started with a hyper-realistic style. My intention was to understand how some techniques could afford to dig deep into the soul. In a second time, I realized It wasn't enough to reproduce a look or a movement in order to tell a story.
In this way was born the idea to accompany the paintings with "written evidence". I added to my artworks pages of novels to describe better the "tale" I wanted to tell . I also use old photos, bills, newspaper pages , handwritten letters , and everything that can add details to a story in pictures .
I've always been a hyper-realistic artist and I often tried to break free from the form to leave more space for the conceptual . But I came to the conclusion that the best way to convey my ideas, my passion, my love or a piece of my mind , is right through attention for details. Through my hand and then through the brush I can externalize what I feel.
This is why my production is so diversified.
When I walk away from perfectionism, little time passes before I regret.
So the only way to continue to love what I do, it's doing it in my way. And the way I prefer is this shuffle to hyper-realism and conceptual art, mixing classic painting with the paper of my favorite books, never ceasing to have the pleasure to paint anything that strikes me."