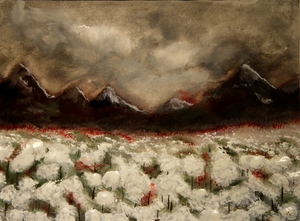 Małgorzata Kisielewska was born in Wąbrzeźno, a small town in Poland, Pomeranian Province.
In 1981 she graduated from the hydro-engineering department of the Gdansk University of Technology and started work as an engineer. In 1985 her artistic talents came to the fore once again when she took up painting and started to express her everyday emotions artistically on a larger scale. Between 1985 and 1990 she completed about fifty oil paintings. Part of this collection was sold at charity auctions in Sweden. After a break of almost 10 years, she began painting again to express her everyday feelings and emotions. Painting became a form of her escape from everyday life.
This time she used watercolors as means of expression.

Moreover:
The Lions Club Gedania Gdansk asked the artist to support their Christmas charity concerts organized in December 2009 and 2010, as well as charity concerts held in May 2010 to celebrate the 15th anniversary of the club. The works donated for that purpose aroused much interest and significantly contributed to the club’s help for disadvantaged children.
The works of the painter may be found in private collections on three continents:
in Europe (Poland, Sweden, England, France, Belgium, Denmark), in America (the USA) and in Australia.

A few watercolors from my wide portfolio.
For more please visit my webpage at http://www.malgorzatakisielewska.com/