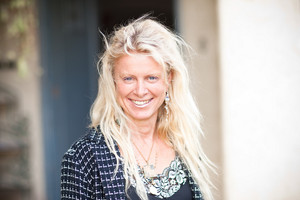 Amadea Bailey was born in Gottingen,Germany and spent her childhood in Kenya. She was educated at Yale University, studied dance and acting at the Royal Academy of Dramatic Art in London and the American Conservatory Theatre in San Francisco and finished her art studies at the New York Studio School in Manhattan. Bailey has traveled extensively and has lived in London, Paris, and New York. Currently she lives and works in Los Angeles, five minutes from the ocean. She designed her own studio, which has been featured in a number of nationally aired films, television shows, and commercials.

Bailey is at heart an expressionist painter.  Her work is emotionally driven, highly textured. and the result of the immediate process of painting. She does not paint according to plan but allows each painting to unfold as she goes along. As Bailey says, “I enter into a dance with each new canvas and never have a clue where I am going to end up.” She works in oil, mixed media, collage, and drawing. Bailey has shown in numerous galleries and her work is in many private and public collections across the country, including that of Halle Berry, Tia Carrere ,Steve Jablonsky and many other others. She is also passionate about surfing, dance, architecture and fashion.
http//www.amadeabailey.com