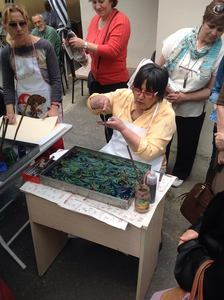 I'm tradional marbling art teacher living
in Turkey in ISTANBUL .My course is supported by the Ministry of Education. I 'm also working with collage tecnique , using my special marbled papers.My brush is my handmade marbled papers. You can see my other works on www.artnihan.com.

THE MIRACLE of NATURE

I am marbing on paper or fabric using tradional marbling tecniques and paints.I -MARBLING

MARBLINGThe art of marbling on paper, or 'ebru' in Turkish, is a traditional decorative form employing special methods. The word 'ebru' comes from the Persian word 'ebr,' meaning 'cloud.' The word 'ebri' then evolved from this, assuming the meaning 'like a cloud' or 'cloudy,' and was assimilated into Turkish in the form 'ebru.' Marbling does actually give the impression of clouds. Another possible derivation of the word 'ebru' is from the Persian '?ry,' meaning 'face water.' Although it is not known when and in which country the art of marbling was born, there is no doubt that it is a decorative art peculiar to Eastern countries. A number of Persian sources report that it first emerged in India. It was carried from India to Persia, and from there to the Ottomans. According to other sources, the art of marbling was born in the city of Bukhara in Turkistan, finding its way to the Ottomans by way of Persia. In the West, 'ebru' is known as 'Turkish paper.'
How Marbling is Done
Marbling is a most enjoyable art form, although one requiring great patience. The first thing is to select suitable paper, as not all paper can be used. The paper needs to be hard-wearing and able to absorb the paint thoroughly. Masters of calligraphy in former times preferred to write on what was known as 'dressed' paper, which had had a mixture of cornstarch and egg-white rubbed over its surface. Marbling practitioners’ on the other hand preferred raw, 'undressed' paper since the 'dressed' version did not absorb paint well. A large, wide, shallow and generally rectangular tray is necessary for the practice of marbling. A kind of white gum obtained from the stem of the tragacanth plant is mixed in a bowl with water in specific proportions. Different substances, such as dried orchid tubers, flax or quince seeds and kerosene may be used instead of the tragacanth gum. The mixture is left to stand for up to 12 hours and stirred occasionally. The gum eventually dissolves, and the mixture comes to take on the consistency of boza, a thick drink made of fermented millet.Later on, the paint for the marbling is prepared in small cups. The paint to be used needs to be ground very finely, and should not be one of those vegetable or chemical paints that do not dissolve in water. After the paint has been dissolved in water in the little cups, two coffee spoonfuls of fresh cattle gall is added. The aim behind this procedure is to prevent the finely ground paint from sinking to the bottom and ensure that it floats on the surface. The paints of various colours prepared in this manner are then spread over the boza-like mixture described earlier which has been emptied into the tray. The paint clings to the surface in small pools, which are then mixed or spread by means of a wooden stick, giving rise to surprising and fascinating designs. Specific designs can also be created according to the artist's wishes. The special paper laid over these designs is lifted to one side some 5-10 seconds later, in very much the same manner as turning the pages of a book, by holding it by two edges and being careful not to smear the paint. The paper is left to dry in a suitable place, the painted side facing upwards. In this way, designs with thousands of details and colours emerge. If the artist wishes to place writing or a flower motif between these designs, he employs another method. The writing or motif is drawn or scratched onto paper. A sharp implement is used to cut them out, and these are then fixed onto the marbling paper with a thin adhesive. The paper is then laid onto the paint in the tray as described above. After the marbling design on the paper has dried, the patterns that have been thinly glued onto the paper are removed, leaving an empty space. This method was discovered by the calligraphy and marbling Master Necmeddin Okyay (1883-1976), for which reason marbling produced by that method is known as 'Necmettin Marbling.' There are several other varieties of marbling, such as 'oversize,' 'combed' and 'flowered.'Marbling used to be extensively employed in bookbinding and calligraphy. On occasion, particularly interesting and attractive designs are used as pictures. Turkey has produced many great exponents of the art, such as Hatip Mehmed Efendi (18th century), ?yh Sadk Efendi (19th century) and Bekir Efendi (early 20th century). Among the last great masters produced after Necmeddn Okyay, both Mustafa Dzgnman (born 1920) and Niyazi Sayn (born 1927) are particularly worthy of mention.

COLLAGE USING MARBLED PAPERS OF MINE.

This is my interpretation of global warming using tradional marbling patterns on paper.The paper is 90gsm.white paper and 50/70cms. The aper pasted on a cardboard .The paper painted using crushed earth pigments and waterbased pigments.

“THE OLD SEA of CUNDA”

“THE CAT by THE WINDOW”

I'm a master teacher ,working traditional marbling on paper and fabric.I also make works of art using lots of scraps of paper torn out of my special marbled papers. With this technique I create figures, landscapes full of emotion, simplicity and joy.

Collage made by using my special marbled papers.

Collage made by using my marbled papers.

I'm tradional marbling art teacher living in ISTANBUL /TURKEY..My course is supported by the Ministry of Education. I 'm also working with collage tecnique using my special marbled papers.My brush is my handmade marbled papers, With this technique I create figures, landscapes full of emotion, simplicity and joy.

Collage made by using my special handmade marbled papers
.I'm a master teacher ,working traditional marbling on paper and fabric.I also make works of art using lots of scraps of paper torn out of my special marbled papers. With this technique I create figures, landscapes full of emotion, simplicity and joy.The scraps of papers are pasted on a cardboard using a traditional gum.

Collage made by using my very special marbeled papers pasting on a cardboard .