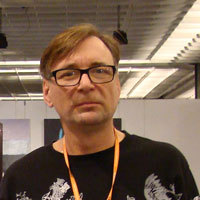 Vasily Zherebilo was born December 11, 1961 in Azov in the family of workers. He has been drawing since early childhood. He was awarded with an honorary certificate for a series of seascapes at the age of ten. In 1978 he finished his studies at the Regional Folk Art Centre and became an artist - designer. He participated in art exhibitions and exhibitions of the Rostov city.
In Moscow in 1991 he participated in World's Fair ART-MIF among the leading artists of the galleries «JULA», where the gallery was entered in the top ten best galleries.
Vasily Zherebilo also participated in international fairs and exhibitions "Art-Myth" (Moscow, 1993), "Spring Salon" (St. Petersburg,1992), Biennale of modern art (St. Petersburg, 1992). The artist's works are in the Museum of Modern Art (Saint Petersburg) and private collections all over the world.
Now he is a member of Russian Artists Union. Pictures of Vasily Zherebilo are bright, lively, full of unusual combinations of colors. Surreal images welcome us to another reality, to somewhere between life, our imagination and author’s fantasy. The whole unpredictable palette of feelings' velvet and silk's tenderness and lightness are in his works…