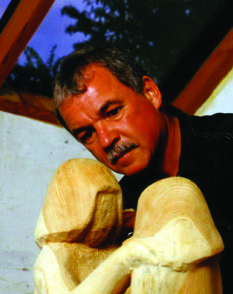 My Name is Georg Cornelius Freundorfner. I was born on 17.04.1951 in Bad Waldsee . Raised in Radolfzell on Lake Constance. I have since 2008 a studio in Meersburg (Lake Constance). With the beginning of the 4th Year of life , I learned carving with my grandfather Kornel Freundorfner. ( He was first Wagner, then a carpenter and carved in winter Madonnas and wooden shoes. Besides, he was a musician ) . My father accompanied me in this tradition. He constructed Christmas scenes in winter. ( He was a farmer and in the winter forest worker). I had my first exhibition 1988 in Stuttgart. Then Expos followed in Tübingen, Zurich and Munich. For 12 years I organized a cultural festival in Salem for other artists (music, literature, theater and visual arts) . Contacts with Dr. Jean Triolet ( Royal Academy of Brussels) and Daniel Moreau and Gustaf Baumeister ( Relates to Willi Baumeister) promoted my work as a sculptor.

Gustaf Baumeister said , for example, about my work :

"Georg C. Freundorfer knows like no other to document the moods, and the beauty of nature. He integrates these diverse creations unique in its art. Every single production of his sculpture is a unikat of the extra-class. International prizes and awards document the high artistic value of his sculptures and the leading position of the wood sculptor Freundorfner in the heart of Europe."
Gustaf Georg Baumeister 2007 buyer of 2 Sculptures

"Our visit by George C. Freundorfer and his sculptures has impressed us and has left strong traces of thought.
His sculptures are "inspired" in their appearance and attitude. I know similar works only in Egyptian Art. The ancient Egyptians created "living sculptures". These sculptures were placed in a mouth and eye opening ritual prepared so that they could absorb the souls of people and also of the sacred animals. (Replacement bodies).
There are no other civilizations that could practiced something similar.
The sculptures of Georg are incredibly strong and would be almost alive in its kind. The ancient Egyptians would have joy in his works."
Important collector of Egyptian sculptures. 31. 10.2011 Buyer of 2 Sculptures of mine: Switzerland

Then followed international awards and exhibitions. Art Shanghai 2010 , Paris , New York , Berlin, Zurich , Luxembourg ... ! In France, came several times television and reported on my work.
2014
A jury selected three sculptures, which were then described by Mrs. Dr. Ingrid Gurlitt, Munich. In June I received in Rome a medal. In May, Dr. Salvatore Russo has described me as "the new heirs of Rembrandt".

GCF The first rays of the sun

This lady was sitting on a bench at Lake Constance. Her donation to the warm sunlight was very impressive. I carved this lady in 1994.

“The first rays of the sun”

This snake I found in 1995 in the forest. It is a sensation. Nature forms a snake with eyes and mouth. Unique and exciting.

This monk I carved in 1993. He spoke with a group of children about the importance of first names. He was very quiet and had a good psychic aura. This was again a snapshot which I have carved into wood.

These 3 different character I carved in 1991. 1) The speaker is convincing. He has the ability to plan and organize. 2) The second type is anxious. He wants to keep all his old habits. He has no determination. 3) The active and energetic type is already in the process of action.

I have carved this Skulpture in the Jear 2014.
Janus was originally a light-and sun-god, the male counterpart of Diana. He became the God of all origin, the beginning and the end, the inputs and outputs of doors and gates, the father of all things (including sources) and all the gods. His name belongs to the same word family as ianua, the Latin word for door. According to him, also the month of January is named. All calendar dates the beginnings symbolized (so-called Kalends) were dedicated to him. The Solemnity of Janus, the Agonium, was born on 9 Celebrated in January of the Roman calendar.

Janus was worshiped as the inventor of agriculture, the civil laws and liturgical customs. Particular importance was Janus for activities for which he should provide protection and support. He acted as mediator between men and gods

This Knight, I have carved in 1988. A knight must never be awakened from his dream. He collects his energies for the battle of life. And he dreams of the virtues, which he learned in his education, also as a child.
Humility, chivalrous reputation, dignity, kindness, High courage, courtesy, courage, moderation in life, restraint, generosity, generosity, gentleness, resistance, strength, education according to fixed rules, decency, good manners.
This is my message for today. The desire of a life in which people recognize the values of other people. And then look forward to the values ??of other people.

“GCF Knight in a dream”