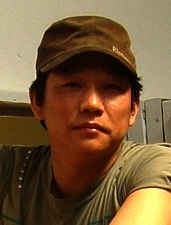 Huang Simao has been working as a full time artist since graduating from Jiangxi Normal University in 1991. His artwork is bought by both domestic and international collectors and investors. Huang Simao is represented by Asan Gallery in South Korea, Sihang Cangku in Beijing and Taiwan and Asart in London. He frequently exhibits at galleries close to where he resides in Songzhuang, 798 and Caochangdi, the three most prominent locations for contemporary art in Beijing. His most recent series of work the ‘Edge of Reason’ is admired for its technical skill and thought provoking imagery.

Growing up as a child in Jingdezhen, the ceramic production centre of China, I was daily surrounded with beauty. The designs on the ceramic items I saw all over the place attracted me to painting. With the qualifying grades I was able to enter a middle school and high school that specialised in art majors. It was there that I began the journey to where I am today.

My most recent works ‘Edge of Reason’ represent the feelings that have slowly developed over time along with this new emerging Chinese society. This new society has developed a group of people that have lost sight of reason. In a numb craze they chase after illusions that cannot bring real satisfaction. They are on the edge of losing everything and yet seem blind to the dangers at their feet. One wrong step and they will fall to their death, their ruin.

Maybe it is the newness of everything that has brought about a loss of reason. In 2006 and 2007 thousands of people entered the stock market for the very first time in their lives. Even beggars bought stocks. People put every cent they owned in the stock market and a year later lost everything. They numbly sought pleasure and because they lacked knowledge lost it all. This is only one example of many things I see happening all over China. People balanced on the edge of reason.

“Edge of Reason” is a series of oil paintings which makes prominent use of paper as the subject matter. The figures painted in these works contain people, figures or objects shaped with realistic looking paper. In most cases these figures are in the foreground. Some are walking tightropes, leaping, dancing, snowboarding, flying, while others are simply dangling on swings suspended surrealistically in the sky. Behind them are backgrounds painted in deep hues of brown or grey. Floating clouds, brewing storms or famous Chinese landmarks hover behind the white figures.

The eyes are the window to the soul. The life-like figures are rendered inhuman with the inability to glimpse into their souls, blocked by the darkness of the sunglasses. One must question whether it is the viewer who is rendered blind to their souls or if it is the figures that are blind to what surrounds them. And yet, if one looks carefully the white paper figures are flecked with strokes of red paint. Blood? A soulless humanity? These soulless people are playing with danger. The ropes they walk on are often frayed, about to break, on the edge of danger, about to fall to their demise. And yet, they appear carefree and natural. Simao has carefully combined symbolism with technique to create masterpieces that produce contemplation as to the deeper meanings hidden behind the cleverly painted figures.

What differentiates Simao’s works from other Chinese contemporary artists is that his paintings depict a subject that not only relates to Chinese society but all of humanity: the blind pursuit of pleasure masked by what can be thought of as a care free life, freedom. With the opening up of Chinese society in the 1980s many people pursued pleasure, money, women, but found as time passed they had lost everything. Although these works stemmed from Simao’s analysis of Chinese society, collectors from other countries often relate these works to their own environments. They depict a phenomenon that exists not only amongst Chinese people but also all of mankind, blindly living on the edge of reason.