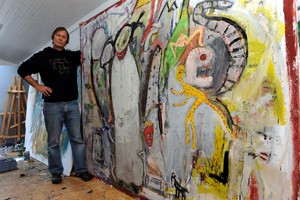 Reinhard Stammer was born on July 25th 1952 in Glücksburg close to the Baltic Sea (Germany). Painting and drawing have always been his passions. At the age of 17 he gave his first exhibition together with a well-known sculptor. The times were turbulent and very political. The late 1960s was a time of revolutions and change, and for many people experimenting with mind-altering drugs was a part of the rebellion. Reinhard Stammer became heavily addicted to drugs and as a consequence he was as an 18 year old sentenced to a year behind bars. When released he tried to find an outlet for his dissatisfaction with social conditions by joining the Communist League in West Germany. This also gave him a chance to develop his art, designing propaganda posters.
Reinhard Stammer’s life was never straightforward. It’s probably what makes it possible for him to do profound paintings, he says. At 33 he founded a publishing house called P.A.R.C.-Verlag. The focus of this company was to reproduce car race posters. He was the only one worldwide, who got the licenses of VW, Porsche, Audi and BMW to reproduce their old race posters. Those posters where distributed all over the world and in the factory museums too. In 2006 he had to sell due to a very serious illness that almost killed him. All those experiences left him with a strong determination to live for his art, and he went into a creative frenzy. In the meantime he found a lot of answers that worked inside of him, since he was a child. First Buddhism and then the Advaita Philosphy, teached by Ramesh Balsekar in Mumbai, were some of the triggers of his current artwork. The sale of his company made huge losses and he had to start new with 56. He went to Mallorca for two years. There he wanted to proceed with his artists career. One exhibition followed the other. Three major exhibitions in Mallorca / Spain in 2008 made him known outside of Germany, and he was one of the artists of the EAGL gallery in Berlin. Mr. Stammer did not take the academic or intellectual way.
The paintings that were on display at the SPACE gallery in London in May 2013 were the results, as he himself puts it, of “having walked the rocky road of life”.
There are also some worldwide exhibitions with some other famous painters from different countries in in 2013.
In the end of April 2013 a 30 minutes interview with a Hamburg TV Sender (Tide) and a lot of extensive documentation about his art in some art journals.
In February 2014 he exhibited in Jaipur / India and further exhibitions in Delhi and Mumbai are planned.
With 20 other internationally known artists from 2014 to 2015 he will participate in a global exhibition series entitled "The Voynich Project" by Ron Weijers.
In Mai he had have a great solo exhibition in the Borey Artcenter in St. Petersburg with a TV report in the Russian TV.