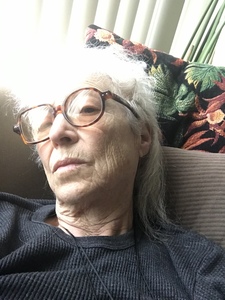 JANE ALEXANDER-PERRY was raised in an atmosphere of New York’s Modern Art movement of the 1960’s.  Her mother was an influential art educator and television producer who introduced her to artists such as Larry Rivers, Franz Kline, Willem de Kooning, Louise Nevelson, Robert Rauchenberg, and Andy Warhol.
Beginning as a fashion stylist for the photographer Bert Stern her transition to fine art photography was inevitable.  Jane’s work has been exhibited in New York, Chicago, and Northern California.
In the 80s she began painting on photographs and in the 90s and early 2000s she taught and exhibited hand coloring in the San Francisco Bay Area.  Not simply satisfied with traditional hand-coloring she developed a more painterly approach in which photography and painting merge.
Jane’s last 20 years’ work is a true amalgam of photography and painting and references her fascination with ideas from quantum physics and neuroscience. For the past three years, Jane has been concentrating on Portraiture.

These images were inspired by dreams and meditations.
Portions of photographs are used symbolically and are fused with acrylic painting on canvas.
CLICK ON THE IMAGE TO SEE FULL VIEW