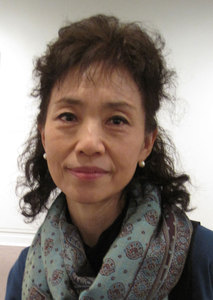 was born in a town near Tokyo, Japan, and lives in Tokyo now. She was in a Japanese experimental performing art group when she was young, around the end of 1970's. In those days, she painted pictures, made strange dolls, wrote poems, and occasionally was a performer. Till the middle of 1990's, she had taken part in several contemporary art events in Tokyo. She got a prize at the short film contest in 1991.
After her last child was born in 1987, she entered a distance course of university, thinking to broaden her knowledge, and continued studying. She studied art history, philosophy, aesthetics and visual culture, and obtained two bachelor's degree, including Kyoto University of Art and Design.
Most of her recent works are originally made by pencils, pastels, acrylics and so on, and are finished up on computer.

Someone there, Something there