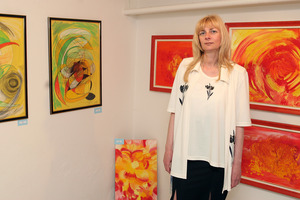 Techniques:
• Color pencils;
• Oil pastels;
• Tempera;
• Watercolor;
• Painting on glass;
• Oil;
• Painting with fingers;
Milena Milusheva paintings - an incredible abstract sense of the world around us, a magic touch of colors and beauty of imagination.

Milena Kirilova Milusheva was born in 1966 in Sofia, Bulgaria. She graduated from the Higher Institute of Chemical Technology with a degree in Chemical Technology of Wood. She worked in different areas of private business, and currently is employed in the Bulgarian State Railways /BDZ EAD/.
In 1998, an inexplicable desire to paint arises into her heart. For a short period of time she is entirely overtaken by the creative need to paint with color pencils, oil pastel with watercolor, tempera and oil, to visibly express the emotional turmoil of her inner spiritual world.

In July 2002 she opens her first solo exhibition in Varna, entitled "Provocation - Spiral of Time” in the Aretha Gallery. Milena Milusheva exhibits paintings of the cycle "Seasons”: “Spring”, “Summer," "Autumn," "Winter"; a series of paintings on glass and works of the so-called fractal painting.
Unlike the realistic painting where the creative messages are obvious, Milusheva abstractly and almost transcendentally expresses herself in one accessible, understandable way for almost everyone with a need for spiritual upliftment. The visitor is provoked by the diversity of colors and shapes shedding from her paintings, which draw no borders on imagination.

In August 2003, TV RTL, impressed by her paintings, and their positive impact, presents them in its program for Bulgaria.

In May 2007 Milena Milusheva opens her second solo exhibition entitled "Beyond Time" in Palitra Gallery in Sofia.
The exhibition was opened by the weaver of dreams - Marusya Kalimerova, graduate of Marin Varbanov.
There are presented abstract paintings affecting human imagination, intuition and layers of unconsciousness, and influencing in different ways the viewers with their energy power and emanation.
Milena Milusheva recreates specific individuals with their problems, life and spirituality, refracted through the artist's perception.

In October 2009 she opens her third solo exhibition entitled "Beyond the Wall" at the French Cultural Institute in Sofia. The exhibition is dedicated to 20th anniversary of the fall of the Berlin Wall. Before The Wall such public presentation of abstract works would have been almost impossible. Now, ever-growing community of connoisseurs of such expression of internal feelings is a result of extensive changes after The Wall.
Here are the words of Professor Stilian Kavlakov, Bulgarian Academy of Sciences, Florida State University, who opened the exhibition:
“For me, dealing with the precise laws of mathematics and astrophysics, was difficult for a long time to understand the sensibility of the artist behind the fantastic forms on the painting, to read her thoughts on the strange color combination lying on the canvas.
But ... fantastic new accurate color images of distant parts of our universe appeared, where billions of stars, linked in endless galaxies are moving with great speed to interact, connect and explode in order to release their huge energy. On the obtained photographs these purely cosmic star movements, subject to precise mathematical equations represent a fantastic combination of lines and colors. Only one step was needed to see how these images of our vast universe resemble the emotional creations of those who are called to express them on the white field.
Amazing is that my colleague Professor Eric Heller, a specialist in the field of nanotechnology found the same analogy between the display of processes in the microsystems. Using powerful computer he shows the abstract beauty of atoms as pieces of art.
Our friend Milena, graduate expert on industrial chemistry, perhaps subconsciously pierced the same. It is evident that the complex movement of chemical molecules has affected in some way the expression of her sensuality. She managed to open her eyes high up and without even know it - to recreate the vast universe in peculiar lines. She managed to look around and absorb the beauty and diversity of the great nature and with her talent to present it in wonderful combinations of colors.
Do not be angry with me that here I will not use the language of art critics and experts, but I will say: Milena does this remarkably well.”
....................................................................................................
In November 2009, TV Art Channel makes a movie about the whole work process of drawing a painting.

In March 2012, Milena Milusheva opens her fourth exhibition “Future of light” in the Information Centre of the EU.
The year 2012 is determined as “European year of active ageing and solidarity between generations”. In this connection, Milena Milusheva commemorates the exhibition “Future of light” as a motto to the European citizens in order to be positive and to participate in the process of making our lives better in the EU.

On May 19th, Milena Milusheva opens her fifth exhibition – “For a better world”, taking part in the European night of museums in Sofia, in the Information Centre of the EU.

The European night of museums is an unique symbol of our cultural heritage of the European nations.

In the occasion of the eight edition of the “European night of museums” in Sofia, the IC hosts two exhibitions: “For a better world” and “Moment from diversity” by Milena Milusheva and Rumen Statkov.

Europe is rich with its history and culture. Each nation is unique with its Art and Harmony between the nations. The European community is a colorful bunch of light, which artists see through their eyes.

In her paintings, Milena Milusheva presents her optimistic view of life, with the richness of the colors, the beauty of Nature, the feeling and her thoughts.

In December 2012 Milena Milusheva inaugurates her sixth exhibition – “In the night of Christmas” in the Information Centre of the EU.

In February 2013, Milena Milusheva inaugurates her seventh exhibition – “Awaiting of Spring” in the Information Centre of the EU.

In November 2013, Milena Milusheva opens her ninth exhibition – “Lights of colorful memories” in the Information Centre of the EU.

In April 2014. Milena Milusheva opened his tenth solo exhibition titled "Before Easter" in the information center of the European Union.

On May 17, 2014 Milena Milusheva took part in the tenth issue of the “European Night of Museums” in the information center of the European Union and opened her eleventh independent exhibition “In the Night of Museums”.

On September 28, 2016 Milena Milusheva opened her twelfth independent anniversary exhibition named “Child of Time”, presented by Art Foundation. Paintings from various periods of the artistic career of the painter are presented.
The audience is particularly impressed by the paintings “Storm”, “Between Two Worlds”, “Child of Time”, “Memory from the Moon”, “It is Music”, “The Way I Love You”, “Fountain of Worlds”, “Expecting”, “Poppies near village Gorna Grashtitsa” and of course her first portray in oils.
The message she sends with her paintings is that we are all Children of time, who have come from the Fountain of worlds.

May 2012 Collective exhibition in Gyote Institute in Sofia – “Germany in the eyes of Bulgarian artists.

The paintings „Storm” and „The other earth” are presented in Zurich.

Here's what she says about her paintings:
My paintings are not only a challenge to myself but a provocation to all people. By
expressing the optimistic view and reflection on life, with rich colors and different techniques I express the beauty of nature, feelings and thoughts. This is my attitude to life, in most cases life affirming, suggested by the predominant color tones, but also more serious and dark shades, giving grounds to philosophical reflection.
Diversity of feelings and events in our lives, in particular our lives in Bulgaria gives me a continuous challenge for reflection, but also individual sense of every change of seasons, rich and distinctive for their colors, combined with the unique nature of Bulgaria.

“Memory of the moon ”