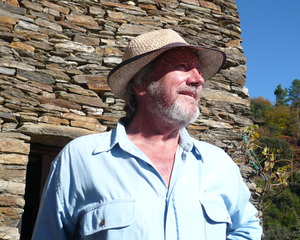 Perhaps so far better known as an environmentally evolutionary sculptor than a painter, his career has been through three distinct periods of functioning as a professional artist, with other successful careers between those periods.

SECOND PERIOD 1983 to 1993, involving mostly sculpture (because of the frequency of Government of commissions) and privately commissioned paintings (portraits, nature paintings and nudes). Studied sculpture with Peter Sedcole (NZ) in 1983/84. In addition to private commissions, the artist has been awarded 16 public sculpture commissions, mostly located in Sydney, two in UK as sister city gifts (Portsmouth and Edinburgh), and has work located in various regional towns in NSW. Larger sculpture commissions varied between $30,000 and $540,000, usually taking from 6 months to 2.5 years to complete. Larger painting commissions included sea and yacht oils for the America’s Cup fund raisers.

The artist also developed his own bronze foundry, (Fineart Bronzefoundry Pty. Ltd), initially to cast his own sculpture commissions, but later expanded to cast works for other sculptors, architects and government. The foundry (1985 to 1993) also became the world’s seventh bell foundry capable of casting and tuning carillon bells and employed up to thirteen sculptor/artisans working full time on casting, conservation and restoration of bronze sculpture and the casting and tuning of bells. The foundry was dismantled and sold in 1993 to redirect energy away from management.

PUBLIC COMMISSIONS:
Victor Cusack's public sculpture commissions (sculpted and cast by him) include the following:

1. Ku Ring Gai Council Bicentennial "FIRST FLEET" sculpture 1.8 metres diameter and weighing approximately 500 kg. The sculpture features the 'Sirius' in full sail mounted in a 'world' shell sculpted in relief with the story and history of the journey. (Budget $45,000)

4. The Hornsby Florence Mall Kinetic Water Sculpture, "MAN, TIME, AND THE ENVIRONMENT", an 8 M. high 21 tonne bronze, glass and stainless steel environmental sculpture incorporating three water clocks of ancient (modified) design and a 17 note Carillon, all mounted on a rotating barge. All the mechanisms are water powered. The huge central pendulum clock has the same time cycle as 'Big Ben' and a considerably larger pendulum weight, and keeps accurate time within 1.5 minutes over 2 months. (Budget $540,000).

10. The sculpting and casting of the 2 metre "BIRD ASCENDING" bronze for Botany Cemetery Trust. (Budget $32,000)

11. Sculpting and bronze casting of SYDNEY UNIVERSITY coat of arms (approximately 1 metre long and 35 kg. weight). Twelve copies have been cast for the university.

12. The "BATTLE OF WATERLOO" relief commemorating the 1990 visit of the Duke of Wellington, now located in South Sydney Town Hall.

13. The "JESSIE STREET" relief celebrating the naming of the park near Circular Quay of that name. Commissioned by Sydney City Council.

16. A second copy of the Governor Hunter bust was given to the city of Edinburgh, Scotland, by Mosman Council and the Scottish Australia Society.

17. A third copy of the Governor Hunter bust was mounted by the Australia Scottish Society in Scone NSW in the Hunter Valley.

18. A bronze Celtic Cross commissioned by Ku Ring Gai Council 2 metres high and weighing approximately 200 kg. The sculpture is based on an ancient Irish design.

THIRD PERIOD 2002 to the present day, involves a recent return to full time painting, drawing and etching (I built my own press). My work is now far more surrealistic and philosophical, on a much larger scale, and attracting enthusiastic approval from viewers of all ages. Drawing very much on nature, rainforest, the sea and human figures, I am exploring the ‘human condition’; our evolution and connection to the continuum of all organic matter degrading into elements that become recreated as life forms. In effect, man’s struggle to live with and rationalise his impact and belief systems on our planet Earth.

Spent recent years redeveloping my now more mature painting skills and thoughts and deliberately avoiding the commercial pressure of exhibiting or selling any of my recent work. Now has a sufficient work for a sizeable one man show, and will shortly seek an appropriate venue.

Quoting from art critic and educator Michael Hedger's book “PUBLIC SCULPTURE IN AUSTRALIA” (1995), "Australia's most recent major fountain ranks as its most unique."...etc..."The fountain is of cast bronze, (cast by Cusack at his Sydney foundry), stainless steel and plate glass, and the scale and the extraordinary combinations provide a work of surprising harmony. Cusack's environmental sentiments are readily apparent and the local Council's initiative in commissioning such a work is visionary."

Man and nature are inevitably one, forced to live or destroy each other and eventually becoming the same elements recreating lives evolutionary continuum.
It is time we realised and took responsibility, to accept the beauty and reject the senseless destruction we manage to generate by insensitive living.

Man and nature are inevitably one, forced to live or destroy each other and eventually becoming the same elements recreating lives evolutionary continuum.
It is time we realised and took responsibility, to accept the beauty and reject the senseless destruction we manage to generate by insensitive living.

This painting connects our fragile human state with nature and the environment, ultimately all rotting down to the same minerals and compost to a form of new life, a reminder that degeneration will happen more quickly unless we become part of what we are and learn to nurture it.

Nature is a logical confusion far to simple for us to understand!

An 'evolutionist' painting connecting man and the sea, based on the English composer Elgar's beautiful composition "Sea Pictures - Opus 37". The site material was painted at Hastings Point, Far North NSW (adjacent to the Tweed Valley).

The sea and man are inextricably integrated, both receding or growing symbolically and psychologically with nature's flow, the moon, and our own stupidity. The site material for this creationist seascape was drawn from Hastings Point, Far North NSW (adjacent to the Tweed Valley area).

The sea and man are inextricably integrated, both receding or growing symbolically and psychologically with nature's flow, the moon, and our own stupidity. The site material for this creationist seascape was drawn from Hastings Point, Far North NSW (adjacent to the Tweed Valley area).

How can man challenge the power of nature without natural negotiation and agreement?

If we succeed in destroying our species, evolution will find new species, as history has confirmed repeatedly. Why do we do this other than because our species is still primitive. Trying, occasional succeeding, but often failing.