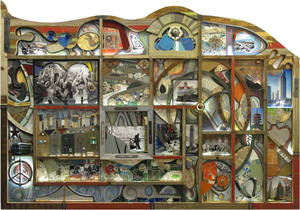 Their completed public art projects include an interior 3D Mural for San Francisco, CA, two exterior floor mosaics for the City of Riverside, CA, three commissions for the City of Reno, NV, including one for the Municipal Courthouse, a commissioned artwork for the promotional materials for “Reno is Artown”, two mixed media pieces for the North Tahoe Middle School in Tahoe City, CA, and two designs used for mosaic columns in a subway station in Rome, Italy.

Their work for private owners include showroom and home design, mosaics, and sculptures in Truckee, CA, mosaics in Sacramento and Corona Del Mar, CA, and paintings and murals in Rome, Italy and London, England. Also, their work has been featured in various exhibits, publications, and reviews.

Daniela was born in Rome, Italy, passed the State Exam in Architecture there, and received her Architectural degree, specializing in “Monumental Architectonic Restoration” (110/110 with laude) with her emphasis and thesis in Scenography, at the University of “La Sapienza” in Rome, as well. She has also received a diploma in Art and the Technical Restoration of Artistic Mosaics. Her experience also includes work as an assistant set designer at the Opera Theater of Rome, Italy.

Dominic was born in Salinas, California, received his Bachelor of Science in Civil Engineering from San Diego State University, CA, and has work experience as a Civil Engineer and in Construction.