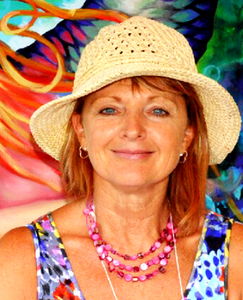 The public award Artist and Sculptor
Linda was born, brought up, and still resides in the small community of Saint Isidore, south of Quebec City, Canada. Her work is inspired by a keen sense of wonder for all living things, people, and nature. As a child, she was already fascinated by colors, drawing, and imagining the creative possibilities of recycling everyday objects. Needless to say, this fascination has only increased with time. Her first oil paintings were produced at the tender age of 10.
In 1987, she started serious training in drawing and oil painting, attending academic workshops, notably with live models and portrait drawing.
Her creativity has no boundaries. In 2001, she completed a session in wood sculpture in St. Jean Port-Joli, , the hub of wood sculpting in Quebec. This experience opened the flood waters of her creative expression. Using multi medium techniques with such diverse materials as wood, metal, plaster, fiberglass, paint, textiles, and recycled objects, Linda creates works of art such as refrigerator doors and fiberglass which are sculpted and beautifully painted. Her fearless experimentation and many successes resulted in her winning the Most Original Artist Award at the Happening 2005 in St. Jean Port-Joli.
Amidst her sculpting and experimentation, Linda’s love of oil painting holds true. In 2008, a special course at L’Academie du Portrait and International de Quebec proved to be a determining threshold in her career… she discovered the ultimate joy of painting skin tones… From this moment on, all the experience and techniques that she had acquired came happily together, allowing her at last to render the emotions that she wanted to convey in her works.
In 2009, while researching the theme of Light-Heartedness for an exhibit, she came to realize the importance of this spiritually joyous characteristic in her life. With this realization came the desire to incorporate joy throughout her works. It was in this context that she painted “Jeune de Coeur” (Young at Heart), and won the Grand Prix Desjardins. The painting remains as part of the permanent Collection Desjardins at the Musee Marius Barbeau in St. Joseph-de-Beauce, Quebec.
The years have brought with them more and more recognition for Linda’s talent , including an exhibition in China, 4 excellence certificates at the International Artavita contest , the Peoples’ Choice Awards at the Ateliers Hors Cadre 30th anniversairy contest in Saint-Isidore 2016, the honorable mention and the Peoples’ Choice Awards at the Desjardins contest 2014, the great jury mention and the Peoples’ Choice Awards at the Symposium Arts et rives 2014, the big prize of MRC Nouvelle-Beauce at the Marius Barbeau museum 2013, Honorable mention at Symposium Arts et Rives 2012, a 3rd prize at an exhibiton in Marennes, France in 2011, and The Peoples’ Choice Awards in 2007, 2008, and 2010 at the Musee Marius Barbeau in St. Joseph-de-Beauce, Quebec. She finds the Peoples’ Choice Awards among the most gratifying as they signify the public’s appreciation of her work.
Linduska has been in many solo exhibitions and a lot of group art shows in Quebec, Ontario, France, Belgium, Italy, Roumany and United States ( New York city, Las Vegas, California and Florida)
Linduska is working on a project inspired by a long-time commitment to recycling and her ever –fertile imagination. Using all her experience, this new project allows her to integrate seamlessly the joy of life with unexpected materials and shapes.
She has undertaken a series of paintings entitled “BB-Pou” based on caricatures of her grandchildren and also a series of paintings entitled * Les Ricaneux * , the funny portaits of Québec comics. Those joyful paintings are in a solo and permanently exhibition at the Salle Albert Rousseau in Quebec city. In 2017 she enjoy doing animals, In these works, she incorporates space where the transparency and abstraction allow the viewer a greater capacity to imagine.
Linda particularly loves to capture the euphoria of life’s magic moments so that one can reflect upon them, feel them, and finally find comfort in them. It can be said without a doubt that her work will evoke a smile, a laugh, and a real sense of well-being to all who view her work

A little girl sharing a her candy with her kitty !

Linduska is presently exhibiting a project inspired by a long-time commitment to recycling and her ever –fertile imagination. Using all her experience, this project allowed her to integrate seamlessly “joie de vivre” with unexpected materials and shapes.

Animals make me happy ! And ! spend great time to make them funnier ! Those art work are for sale and they are all on gallery canvas without frame ! Spend the news !

The Atelier Hors-Cadre, St-Isidore ,Québec . The owner celebrated their 30 th business anniversary on december 2016. So 30 artists was invited to do a painting for a contest ! I won ! I painted their portraits !

Winner of the 3 th grande distinction in Marenne , France , My painting * Surprise *

Public choice and the jury mention !

Public choice and the jury mention !