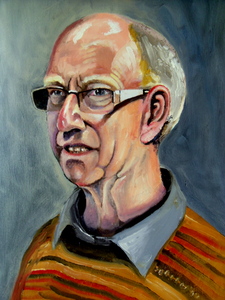 From an artistic family in the UK David was demonstrating talent from an early age with a number of prestigious painting awards by the age of 18. He pursued a career in architecture ultimately leading to appointment as joint managing director of a Manchester based design company.

In 1999 David was selected to head up Opus Architecture in New Zealand and for 11 years led a period of growth and success for the practice with many awards won including the inaugural New Zealand Architecture Medal in 2008.

Despite a successful career in architecture his passion remained with drawing and painting. David built a studio in his grounds at Ararimu and now focuses exclusively on his painting, working mainly in oils and finding inspiration in the local landscape, coastal scenery and the human figure. His paintings are unashamedly both representational and evocative, exploring pattern, structure, and those spaces beyond that intrigue the onlooker. He enjoys the task of simplification and rationalisation, using colour and tonal quality to reinterpret and invite the viewer in.

“On the beach at Hamilton's Gap”

“A space to find myself”

The shutters are down. Secure from the gaze of passers by Jenny reflects as rays of the sunlight penetrate the gloomy interior.

“Bach at the end of Stent Road”

An iconic kiwi bach on a wild part of the Taranaki coastline, Stent Road has become globally famous as a surfing destination. For me the contrast of colours in the afternoon sun, texture and shape present an exciting image of the uniqueness of the kiwi coastline.

Capturing the dramatic contrasts between the restless sea, with rocks hewn smooth by the motion of the waves, and the harsh lines of the modern city built to the edge of the beach, the delineation now marked by the coastal walkway.

Walking in the re-generating bush around the lower slopes of Mount Taranaki I came across the remains of a rock crushing plant, where vast volcanic boulders were once transformed into the stone used by the early settlers to build roads. The roughly cast reinforced concrete has been left for posterity as giant abstract sculptures emerging amongst the soft greens of the summer foliage.

“The Seabird Coastline from the beach at Miranda”

Miranda is a favourite haunt with big skies, shingle banks, reed beds and birds perhaps reminding me of the wilder parts of coastal East Anglia where I spent my teenage years.

“Tata Beach in the Marlborough Sounds”

“All Souls Clevedon glimpsed through the Totara Trees”

With major lines in the composition drawing the viewer towards Georgie’s face and eyes which in turn gaze into the distance and out of the picture frame, conveying a sense of peace and tranquility – lost to the world.

Contrasting the tender warm curves of the young Japanese woman with the distant harsh ruggedness of the iconic Mount Fuji, the object of her dreams.