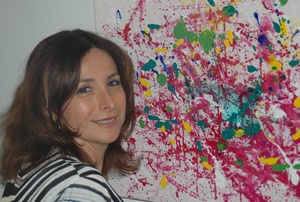 In my youth I was deeply influenced by the art of David Alfaro Siqueiros and Frida Kahlo as well as by european and american paintings, specifically the work of Jackson Pollock.

I studied at the Instituto Nacional de Bellas Artes, Mexico City and completed my studies in Italy at the Istituto Europeo di Design, Rome and in Israel at the Bezalel Art Academy in Jerusalem.

From 1982 to the present day I have participated in numerous international individual and group exhibitions. In 1989 among others I received the prize from the Japan Design Foundation in Osaka with the thematic "Fire". 1997 I was one of the winners of the "Print-Works" in the 8th Int. Exhibition Contemporary Art Osaka.

In 2010 participated in the 2nd Biennale Internazionale D'Arte Contemporanea Sabbioneta and in 2011 in the VIII Biennale of Contemporary Art in Florence.

Since 1991 I live in Germany where I work as an artist.

“Sound of the Ocean”