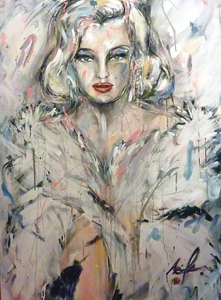 Bio
April Anselona: ("Fashion Fusion") Artist: A combination of Fashion Illustration,Pop and Contemporary art.
The distinctive artwork of April Anselona is classified by April as "Fashion Fusion"her art has won her the accolades of such notables as renowned Designer Christian Lacroix. Her illustrations have been featured in national publications including “La Art deVivre ”Sun Sentinel, Season
Fashion Magazine, Women's Wear Daily and twice in Beckett Publications,who also recognized her with an honorable mention. Her work has appeared in numerous regional and local periodicals including a featured piece published
in the 2006 edition of Marilyn In Art Hard Cover Table Book.

April holds an Associate of Science degree in Fine Art, Fashion Illustration, Advertising and Graphic Design. She has permanent collections in the Archives of The National Museum of Women in the Arts, Washington, DC.The White House, The Presidential Library in Texas, International Museum of Cultures in Dallas, Texas, The Pennsylvania Veterans Museum, in public collection in the City of Tamarac, Florida's Government building, the Palace of the King of Spain (Juan Carlos) and in 2005 Public collection at the Pentagon.

The bold, enigmatic style of April????s technique captures the essence of her subject from whimsical sketches to her powerful painterly style.She has rendered her art effectively in diverse mediums including Watercolor, Acrylic, Oils, Gouache and various mixed media.

April's renderings and digital designs have been purchased and exhibited in New York, Miami, Florida and New Orleans, Texas, Pennsylvania, Washington D.C. and Spain. Her fashion art designs have been presented at the Jacob Javits Center along with upscale trendy boutiques in New York and South Florida.

Sought out for her appealing sense of line, design, color and content, April's work is commissioned by private individuals, interior design firms, casinos, the hospitality industry and a wide spectrum of publications.

Her artwork is sold throughout the United States. April is an honored member of the Biltmore's Who's Who list.